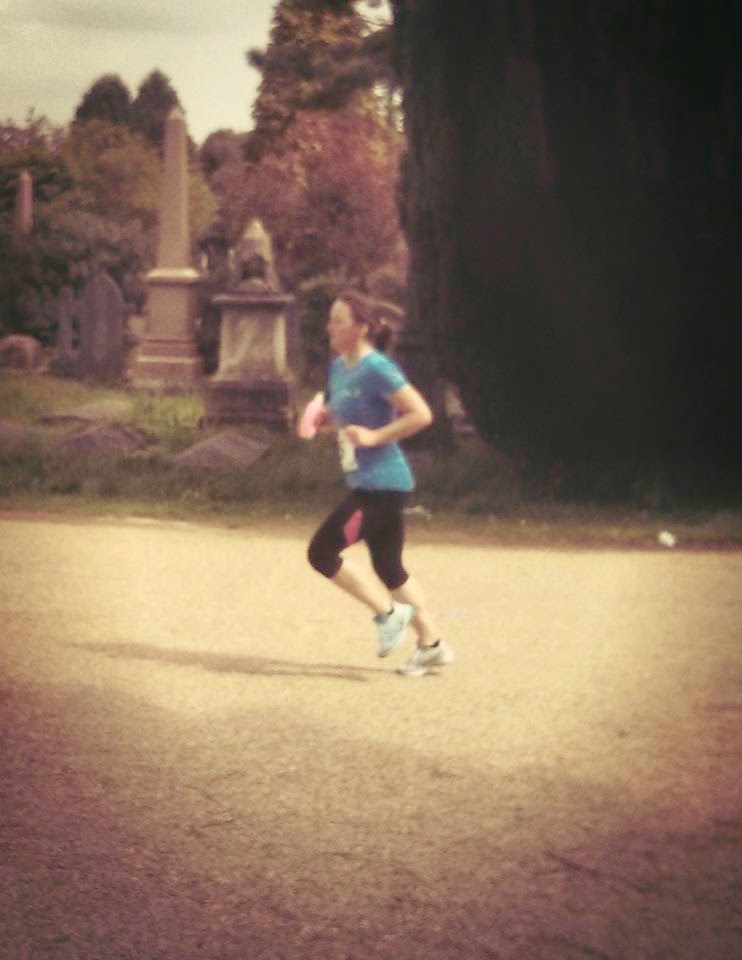 It’s true, I’ve become a running bore. I subscribe to Women’s Running magazine, I scour race websites looking for new challenges, and I spend time considering which socks are most suitable for running in. But I don’t much care that I’m a running bore, because I’ve been truly bitten by the running bug and discovered just how addictive it is sweating it out around a marked out course and being presented with a tin medal at the end.

Until seven years ago, I was super fit. For years, I went to the gym four times a week, and saw a personal trainer for at least one of those weekly sessions. I was slim, toned and knew how to build up or slim down different areas of my body. But then I developed a long-term illness… and exercise fell by the wayside, until I realised many years had passed since I’d last done anything resembling real exercise. In that time, I’d put on a few extra stone and hated what I saw in the mirror. Urgh.

So last July I decided to do something about it, after seeing one photo too many of myself that made me want to cry. No longer in a position to join a gym or pay a personal trainer, I found a free option – I downloaded the NHS Couch to 5km podcasts and started running around my local park in Bristol. It look me a little longer than the suggested nine weeks, but by Christmas I’d finally completed the programme and was surprised to discover I quite enjoyed running. Who’d have thought?

Ever the competitive one, on January 1 I signed up for the Bristol 10km race, which is held in May – having never run 10km in my life. So to warm up for it, I also signed up to a few local 5km races beforehand. The first 5km race was on a sunny March morning at Ashton Court… and I made it round in 32:35, which didn’t feel too shabby considering I’d turned up late and was flustered. The second 5km race was on an equally sunny May morning at Arnos Vale, and having turned up in good time I managed to race back in 28:41, despite two big hills. Triumph!

And then it was the big one, the Bristol 10km, the race I’d set my sights on as the one in which I would really prove a point to myself. So last Sunday morning, on a day in which the wind was an estimated 18mph and the rain was infuriatingly persistent, I lined up with 11,000 other eager beavers and set off to run around the magnificent Harbourside area of Bristol.

I was a bag of nerves when I woke up, having really psyched myself up for a challenge – and having only run about 8km on my longest practice runs (although I was clocking up two to three practice runs each week). I knew the Bristol 10km was going to be as much a mental challenge as a physical one, because even though I knew my body was physically capable of running 10km, my mind has a frustrating habit of persistently telling me what a worthless lump I am.

I was in the middle of the final wave to cross the starting line, which felt a little anticlimactic because the big starting gun only goes off for the elite super runners… who had set off so much earlier than us that by the time we were walking towards the starting posts, we saw the winner Scott Overall race past us on the home stretch having just sped around the course in 30:20. We hadn’t even started yet and he’d already won!

The first few minutes went by in a blur as I was so caught up with the experience of being part of such an enormous race, and of being just one body in a crowd of 11,000. The novelty of running along roads I’d only previously driven down was a mild distraction, as was the weird feeling of being watched like a performing zoo animal by the spectators lined up on the bridges and roadsides.

When I first read the race rulebook, I was devastated to discover that iPods were banned. And ‘devastated’ is no overstatement. In my mind, I can only run with music playing. I need 1980s’ power ballads to motivate me, distract me and spur me on. But they are banned in the Bristol 10km (although I noticed a few people wore them anyway). However, it genuinely didn’t matter in the end and I barely noticed I had no music on. I was so caught up with listening to the chatter of other runners, the shouts from the crowds, and the general buzz of the event.

Perhaps the hardest stretch was the four or five kilometres that are straight up the Portway under the Suspension Bridge, and then looping back down again, simply because I find it really boring running in a straight line as there is no distraction in the way of new scenery. Although that’s a little trite, considering that the views across the Avon Gorge are stunning and you also get to race past the SS Great Britain.

By the 6km marker, I realised I hadn’t yet slowed to a walk at any point, and this is when my wicked subconscious started playing tricks with me. The devil on my shoulder started telling me how tired I was, how weak I was, and how I definitely couldn’t do the whole 10km without walking just a bit of it because I’m useless and incapable. So I caved in and walked for two minutes after hitting the 6km mark, and was annoyed to be overtaken by runners who I’d already enjoyed overtaking myself.

Back running again, the road curved along past the Louisiana and down some residential streets… although it was hard to keep track. Just as nothing looks the same under heavy snow, familiar streets suddenly seem like alien landscapes when freed of cars and filled with thousands of runners. Someone shouted my name in the crowd, and I was thrilled to see a friend who’d spotted me, and with 2km left to go this spurred me on for the final push more than I could ever have imagined. And we sped on over the Prince Street swing bridge (the geek in me loves running over bridges, I can’t explain why!) and up towards the centre… the final 800km.

This is where the crowds really appeared in bulk, filling the centre of Bristol, lined up behind railings and shouting, cheering and waving banners. Even though it was getting near the end of the race, I felt like I had plenty of energy left in me and managed to speed up a bit, especially going past the Hippodrome and seeing ‘600m’ spray painted on the road. The end was almost in sight and glancing at my watch I knew I was so close to coming in just under 60 minutes (my goal had been to come in under 70 minutes). In the end, I crossed the finish line, arms up, grinning, in 60 minutes and 24 seconds… just 25 agonising seconds shy of a sub-60 target. But even so, I was on cloud nine. I had the runner’s high.

Tired, hot, sweaty… I bumped into two other runners I knew who also happened to have finished at the same time, and we collected our medals and t-shirts and went round to Millennium Square to reflect on how brilliant it had been – all three of us having just run our first ever 10km race. One of us dressed as a bear.

I’m now well and truly bitten by the running bug, and have several more 10km races (and a few cheeky 5kms) lined up sporadically through the rest of this year… starting with a 10km in Cardiff in two weeks. Does racing in Wales make me an international runner?!

Good news – Spurred on by the Bristol 10km, I have signed up to do the Bath Half Marathon in March 2015.

Bad news – I’ve discovered that as a 36-year-old woman, I technically qualify as a veteran runner. Yes, a VETERAN runner. The indecency of it!
Posted by Jane at Wednesday, May 14, 2014