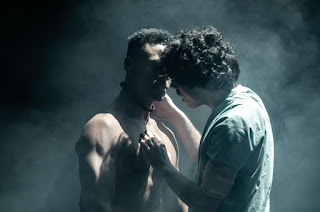 There were times while watching Equus at the Bristol Old Vic that I felt the audience ought to quietly creep out of the auditorium and leave the actors to it, so heightened was the sexual chemistry on stage.


In this new production of the classic 1973 play by Peter Shaffer and directed here by Ned Bennett, the English Touring Theatre has reinvigorated this fictional account of the true story of a boy who blinded six horses. A psychological thriller where we know who committed the crime but not why he did it, Equus rips open our psyches and exposes human conditions from loneliness, desire, repression and mental illness.


Largely set in a psychiatric hospital, we meet psychiatrist Martin Dysart (in a mind-blowing performance by Zubin Varla) who is persuaded by a magistrate (Ruth Lass) to add to his overloaded case list with a troubled 17-year-old boy who has just been spared a prison sentence despite intentionally blinding six horses in one night. That boy is Alan Strang, who is portrayed in an astonishing performance from relative newcomer Ethan Kai.


Alan’s obsessive devotion to horses, especially Nugget, is of course the central crux of Equus. But this is really a metaphor for Shaffer to explore the human condition. The human relationships surrounding Alan are wreaked with unhappiness (his parents have a sterile marriage, Dysart has a loveless relationship with his unseen wife, Alan is unable to consummate his attraction to Jill). The handling of power is constantly being distorted - who actually has the control over anyone else? The repression of sexuality seeps out of the stage and is famously shown through the bondage-esque eroticism of riding a horse while naked and fetishising the bit in the horse’s mouth. A lot. 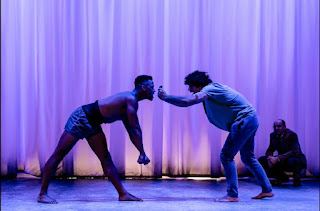 Despite being monologue heavy, the script is gripping and tantalising. We know what has happened but we want to know why it happened. And via Alan’s uptight father (Robert Finch), hyper religious mother Syreeta Kumar) and friend Jill (Norah Lopez Holden) we start to find out more about what led Alan to do what he did.


Ultimately, Equus leaves us questioning how one human can possibly understand another and what exactly it might mean to be mentally unbalanced.

The Smallest Things by Nick Duerden 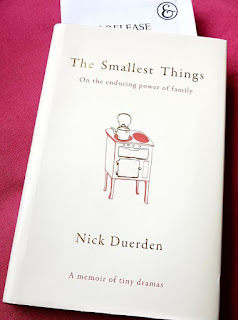 In The Smallest Things, journalist Nick Duerden shares a beautifully curated series of vignettes into the lives and workings of his Italian grandparents and their attitudes to life. Although obviously a personal memoir into his own family, Nick's writing invites the reader to consider their own family relationships while they read and, more importantly, to remember the things that are worth celebrating.

The Smallest Things is a celebration of the finer details. Such as the intricacies involved in persuading two elderly, set-in-their-ways people that a day trip in the car with their new granddaughter-in-law would be a nice thing to do. Or the careful handling of a long-held family secret and the reminder that paternity has less to do with who biologically fathered a child and more to do with who loved and raised that child.

Each chapter is its own self-contained story. Carefully and sparsely written, no words wasted. And each chapter is bookended by a tip from Nick's Italian grandmother - the art of boiling spaghetti for hours on end, or airing a bed each day and the way it must be done if it is to be done correctly. This all creates a very inviting welcome package into the Duerden household and the secrets they keep.

The Smallest Things is a lovely book of tiny dramas, and a good reminder to value the little things our families do... and to ask the questions we have before it is too late.