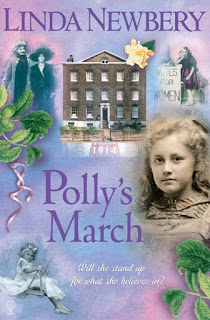 Continuing my mission to uncover and read as many fiction books about the UK suffrage campaign as possible, today I finished the children's book Polly's March by Linda Newbery. Which, fun fact, is part of a series of six books with two other authors where they all set their stories in the same London house but in different eras, giving a fascinating spin on history through the eyes of the girls who lived there (well, I imagine it does, I've only read this one!).

Linda's book is set in 1914, on the eve of World War One, and sees 13-year-old Polly pining for her friend Lily who has recently moved out of the flat upstairs, only to be replaced by two unusual ladies... who turn out to be suffragists called Violet and Edwina, much to the horror of Polly's prissy parents and the other family who live in the Chelsea Walk building.

Through a chat in the garden with her new neighbours, and later visits up to their flat, Polly learns about the suffrage campaign and quickly understands just how important it is for women to have the vote if they are ever to achieve their ambitions (Polly wants to be an explorer, something women just didn't do in 1914 - well, some women did but not many). Militant suffragette Edwina is recovering from an imprisoned hunger strike, while her peaceful suffragist friend Violet opposes the violent strategies and prefers the calmer approach to campaigning.

Polly's March is an inspired way of getting the suffrage message across to younger readers, and is very accessible. There's a lot of historical information in here without making it seem like a text book. Yes, I definitely recommend this one for younger readers (maybe for children of about 10 years).

PS - Linda has another young adult book about the suffragettes as well, called Until We Win. I will report back once I've got a copy.
Posted by Jane at Saturday, December 23, 2017 No comments:

History Workshop wrote about the lack of female statues recently. The author of the post, Bee Rowlatt, explained how every time she visits a new city she asks one question: is there a statue of a clothed woman who is not a queen? Similar to the Bechdell test for films, Bee is dubbing hers the Rowlatt test.


Bristol would fail the Rowlatt test miserably. Despite being the seventh largest city in the UK.


I have just finished writing The Women Who Built Bristol (published on 26 February 2018 by Tangent Books), which is a compendium of more than 250 women who helped to shape the city of Bristol. They encompass everyone from teachers to spies and factory workers to temperance campaigners. And one of them is a goddess.


I included Sabrina, Goddess of the Severn, in the book because - apart from the statue of Queen Victoria at the bottom of Park Street (Queen Victoria visited Bristol once, very briefly, so I’m not sure why she warrants a statue) - Sabrina is the only statue of a female form in the city. Unless you count the wooden monument to Wendy the elephant at Bristol Zoo. It’s all rather embarrassing. Especially since Sabrina is naked in her Bristol statue (created by Gerald Laing).


But here's a fun fact about Queen Victoria’s statue, which was unveiled in 1988 by her grandson Prince Albert Victor:  in January 2016 it experienced a feminist makeover by Fishponds-based street artist Vaj, who added legs and pubic hair. Unimpressed, Bristol City Council removed the additions within 24 hours. Spoilsports.


There are more than 250 Bristolian women featured in The Women Who Built Bristol. You would think some of them would warrant a statue in the city they helped to shape. Perhaps more so than some of the many men who are immortalised in bronze etc around the city.

It's Christmas time, there's no need to be afraid... or is there?

The annual Bristol Old Vic Christmas show is a date to be circled on the calendar in red, splattered with glitter and looked forward to for weeks. Bristol Old Vic knows how to do Christmas shows well. But they've taken a big risk with the 2017 production, directed by the exciting Emma Rice: The Little Matchgirl and Other Happier Tales.

Those familiar with Hans Christian Anderson's The Little Matchgirl will know it is one of - if not the most - tear-jerking of fairytales. Which of course prompts the And Other Happier Tales element of the sub-title. Those other tales being Thumbelina, The Emperor's New Clothes and The Princess and the Pea. Although I'm not sure 'happier' is the word I'd apply to these, especially Thumbelina, despite a truly magnificent performance from the mighty Katy Owen.

Big issues are at play on the Bristol Old Vic stage this Christmas, and themes ranging from domestic abuse, forced marriage and emotional abuse sit alongside the equally cheery ones of extreme poverty, homelessness and soldiers scarred by warfare. Of course, it's right to acknowledge that for many people Christmas is not a happy and sparkly time, and that plenty of people don't even have a roof to spend Christmas under never mind a family to spend the time with. But is it appropriate to tackle these important issues in what is billed as a Christmas show for the family (the publicity recommends it is for ages eight and above, although Bristol Old Vic has a separate Christmas show for much younger children)?

It felt a little jarring to set the homeless and destitute Little Matchgirl off against singing and dancing beetles; to see Thumbelina trafficked by Mrs Fieldmouse into a life of slavery and domestic abuse and set this alongside the all-singing storytelling troupe The Shuteyes... and so on. It felt rather like two different productions going on alongside one another but that they didn't quite gel. Separately, they would have doubtless been two excellent shows.

The real highlight was The Emperor's New Clothes, where Niall Ashdown triumphed as the preposterous and bumptious Emperor, and the big reveal at the end was well worth the wait. Just magnificent.

With the popular blend of puppetry and human performance, there are some excellent turns from the cast - notably Katy Owen and Niall Ashdown who are mentioned above, but also puppeteer Edie Edmundson. And the stage design and live music are, as always, excellent.

Director Emma Rice defends the decision to put on a less jolly Christmas show by saying it offers us a window into other people's lives: "We want to think of others at Christmas, we want to share stories and take time to imagine the lives of others and maybe even consider what we can or might do to help." While I certainly don't disagree, I still wonder if a Christmas family show is the right place to do so.

Regardless, The Little Matchgirl and Other Happier Tales is, as you would expect from Bristol Old Vic and Emma Rice, an accomplished, satisfying and largely tight production. It is inventive, imaginative and, at times, laugh out loud funny. But given it's very closing scene, I wonder if it will leave audiences with the warm and fuzzy festive feeling they had hoped for...


The Little Matchgirl and Other Happier Tales is performed at Bristol Old Vic until January 14. Click here for more information and to book tickets.