'Renishaw Hall: The Story of The Sitwells' by Desmond Seward 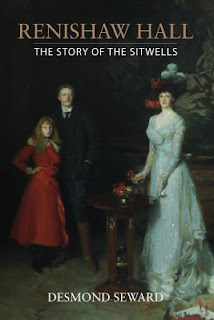 Renishaw Hall in Derbyshire is consistently voted one of England’s most beautiful houses and its exquisite gardens scoop awards and applauds all over the show, and in his new book historian Desmond Seward celebrates the 400+ years of English history banked into its foundations.

Perhaps most famous as the home of the literary trio Edith, Osbert and Sacheverell Sitwell (who were the biggest rivals to the Bloosmbury Group of the 1910s and 1920s), Renishaw’s heritage actually extends back to its foundations in 1625 when the first George Sitwell saw his plans for the family home take shape and he assumed residence. Inevitably, due to the ease of information about more recent history, the second half of the book focuses on the past 100 years while the first half whizzes through the first three hundred.

Through Renishaw Hall: The Story Of The Sitwells, Desmond meticulously catalogues each and every triumph and set-back in the long history of the Sitwell family – at times painfully so. Because while the book is undoubtedly rich in detail, there is the impression that Desmond has been so thorough in his endless research for this book that there is no scrap of information he has left out. The result is a somewhat bamboozling avalanche of information, much of which relates to historical figures whose entry in the book is fleeting, leaving the reader with a phenomenal cast of characters to try and keep tabs on.

With such a rich seam of characters and events to share with contemporary readers, I felt it a pity that Douglas’ book read so drily and didn’t bring the story of the house and its inhabitants to life in the same way that, for example, the gorgeous colour picture sections do. However, to read about the forgotten Sitwell family members is fascinating and is an excellent history lesson.

For more information about the house (and when it is open to the public), please visit the Renshaw Hall website here. 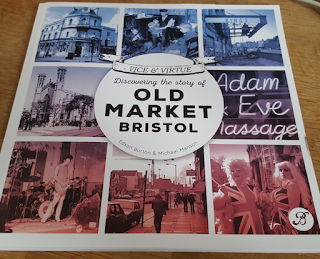 I’ll be the first to admit that Bristol’s Old Market area is somewhere I avoid like the plague as it has such a dubious reputation: many of the shops and businesses operating from there are of a less than feminist variety (brothels, lap dancing clubs, sex shops etc) and the whole place looks like it needs a lot of care.

But if you look above the shopfloor level there is suddenly a lot of fascinating architecture there (from the Trinity Centre to Central Hall and the Stag and Hounds) that reveals a significant and prosperous relatively recent past. Before town planners screwed it up by planting a ring road to isolate it from the rest of Bristol city centre.

With the new Vice and Virtue project, the Trinity Community Arts team has worked hard to celebrate and reverse some of these preconceptions. Including mine.

Mike Manson and Edson Burton have collaborated on the new book Vice & Virtue: Discovering the History of Old Market (published by Bristol Books, £10, and also available from the Trinity Centre) to blow the trumpet for Old Market’s diverse and colourful past and present.

Once one of the busiest trading areas in Bristol, the Old Market area was also heavily populated and dominated by a variety of parish churches to accommodate the many faiths and worshippers. Filled with almshouses, pubs, churches and a rich array of shops, Old Market was a destination in itself and there was little reason for anyone to leave the area if they didn’t want to. 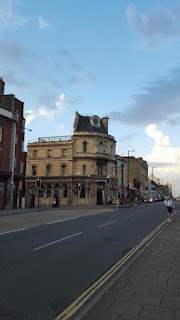 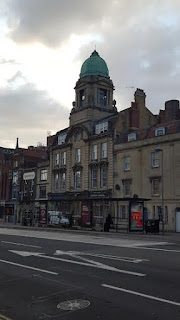 Much of the beautiful architecture still remains (The Palace Hotel - above left, Drill Hall, Central Hall - above right, and the Trinity Centre), and although now much of it is rather shabby you can still trace the former prosperity of the neighbourhood through the shadows it leaves on the skyline.

As Mike and Edson’s book shows, the area truly thrived in the years from 1900 to 1939, and even in the period during and after the Second World War it held its own. But the 1966-1967 reconstruction of Bristol City Centre involved the town planners deciding to put a whopping great roundabout and ring road between Old Market and Broadmead, meaning that Old Market instantly became an abandoned and isolated no man’s land… as well as seeing the brutal destruction of a raft of beautiful buildings in the process.

Revisiting Old Market recently for the launch of Mike and Edson’s book recently, and to view the accompanying exhibition at Trinity Centre, I walked down Old Market slowly and with new eyes – looking upwards and past the grotty and seedy shop fronts and boarded up buildings. It’s still an area with a long way to go before it becomes in any way popular again, but thanks to the work of historians like Mike and Edson hopefully others will also recognise there is more to Old Market than currently meets the eye.

Visit the project website by clicking here.
Posted by Jane at Monday, July 27, 2015 No comments:

'The Hourglass Factory' by Lucy Ribchester 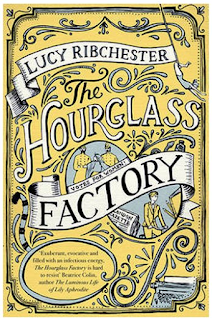 What's this? A new novel about the suffragettes? One that doesn't centre around the friendship between an upper-class lady suffragette and an underprivileged working-class suffragette? Count me in!

As long-suffering blog readers will know there is nothing I like more than something suffragetty. So I welcome Lucy Ribchester's debut novel The Hourglass Factory with open arms and a green, purple and white badge of honour. (It doesn't hurt that I love the cover, too. I mean, look at it!)

Frankie George is a hot-headed and determined young journalist who is determined to make her editor on the grimy tabloid newspaper where she works take notice of her. Sick of being given stereotyped and boring ladies' stories about fashion and gardening, Frankie takes a leaf out of real-life journalist Nellie Bly's book (a shero of mine since I wrote my MA thesis about the women student journalists of the 1910s. If you don't know who Nellie is, click here) and throws herself into an intriguing web of mystery and drama.

Essentially a crime novel, The Hourglass Factory follows Frankie as she tracks the mysterious trapeze artist, tiger tamer and burlesque performer Ebony Diamond around town... a feat made more difficult after Ebony goes missing one night when a big theatre stunt goes wrong.

With lots of gorgeous references to corset fetishists, eccentric old society gals and bizarre poisons, The Hourglass Factory follows Ebony and her gang of misfits as they seek to reveal what really happened to Ebony while scoring Frankie the newspaper scoop she's hankering after. Will they pull it off?

While there are definite hints that this is Lucy's first novel (if you know the suffrage era well you'll wince at how shoehorned in some of the historical references are; and the crime plot only works because so many fortuitous events happen at the right time), when the premise is this delicious it's hard to mind too much. I look forward to seeing what Lucy does next. In the meantime, I want The Hourglass Factory to be made into a film. Get to it, Phyllida Lloyd.