Never has a production about death and loss been so enjoyably silly and uplifting. It is safe to say that I enjoyed every last second of the Little Bulb Theatre’s production of Orpheus - from the exquisitely designed poster to the joyously beautiful music.

Billed as the most haunting love story ever told, Orpheus is based on the ancient Greek myth of the talented musician and poet who attempts to convince Hades, the king of the underworld, to return to Orpheus his beloved wife Eurydice, who died following a snake bite. 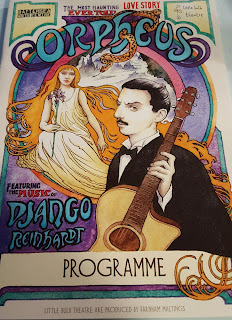 In essence, the Little Bulb Theatre has conveyed the whole story to us within the first quarter of an hour via an enchanting musical interpretation of the poem performed by the supremely talented Triplettes De L’Antique. But really, that’s by the by. Because audiences are urged to sit back and let the two hours that follow wash over you like a celebratory tide of ridiculously silly fun.

For this production of Orpheus, the company creates a silent film effect with titles projected onto the back screen to replace any need for spoken words during the whole show. The result is very effective, meaning the cast relies strong on music, song and mime. And since the audience was already told the story at the top of the show, we simply sit back and watch it unfold before our eyes.

We’re transported to 1930s Paris where Django Reinhardt is performing as Orpheus in a play, with Yvette Pepin as his Eurydice. But don’t worry if you think the play-within-a-play idea is confusing, it’s not. Whether as Django or as Orpheus, actor Dominic Conway is quietly serene in his stillness as the magical but lovelorn musician. And whether we see her as Yvette or Eurydice, Eugenie Pastor holds the whole show together with her bubbling enthusiasm and joy.

But more than anything, the supporting talents of the Triplettes (Clare Beresford, Miriam Gould and Shamira Turner), the Stage Hands (Tom Penn and Alexander Scott) and the pianist (Charlie Penn) transport the production to a fantastic new level. The woodland scene (pictured top) of the cast appearing as rabbits, bears and donkeys seduced by Orpheus’ playing is an absolute treat, but the vocal talents of all six is truly impressive.

I truly enjoyed every moment of this show. It combined the simple measures of a classic story with fabulous music and a strongly talented cast. I can’t urge you enough to go and see this for yourself.