For readers who love the homely warmth of a Dorothy Whipple or Frances Hodgson Burnett (two more much-loved Persephone authors), reading the country cottage concerns of Barbara Buncle are like being enveloped in a big woolly hug by a favourite granny.

Barbara Buncle originally lived in a sleepy English village, until she ruffled the feathers of her neighbours by exposing their shenanigans in a loosely disguised novel. So the second instalment saw her up sticks to her new village, where she settle with her publisher husband. And now we catch up with Barbara who is safely ensconced in her new home and getting to grips with England in wartime.

In theme, The Two Mrs Abbotts reminded me of another Persephone book – A House In The Country byJocelyn Playfair (which, it pains me to say, is one of very few Persephone books that I have not enjoyed… which is more to do with the style of writing than the content). In that both books are concerned with the women left behind to pick up the pieces in England’s countryside while most men are fighting the war overseas. In both books, the capable and strong women find themselves sharing their country homes with unlikely characters, making do with some trying situations, experiencing awful longing for their absent other halves, and managing the awkwardness of unwanted attentions from interloping men… themselves displaced by the awfulness of the war.

However, where The Two Mrs Abbotts succeeds for me is that the war is not presented as a character in itself… it is simply the backdrop for the situation that our characters now find themselves in. There is no sense of self-pity, and no searching for sympathy. In fact, there is scant narrative thread through The Two Mrs Abbotts – rather, we are presented with a series of interlinking short stories (a young man and his unsuitable fiancée, a soldier and his unrequited love for Jerry, the resentment of a refugee family, a runaway London girl, the morality of whether a man should fight or not etc), that compel us to turn the pages as fast as possible to find out what happens next.

Although The Two Mrs Abbotts is the last in the Miss Buncle trilogy, the character of Barbara Buncle spills over into several other books by DE Stevenson – such as The Four Graces and Spring Magic. So, if you will mourn Miss Buncle as much as I will, then I suggest we start trawling second hand bookshops until we find her lurking in the pages of other novels by the same author. 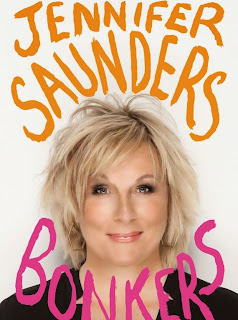 While Bonkers is certainly not a warts’n’all book, Jennifer Saunders’ autobiography is a gripping and compulsive read, with Jennifer’s distinctive voice almost reading it aloud in your head – such is the strength of her character on the pages.

While we read about her relationship with lifelong comedy partner Dawn French, working with the legendary Comic Strip team, and her love for Joanna Lumley, we learn little about her experiences as a wife, mother or friend. But that’s hardly surprising as Jennifer has always been a woman who appears to have struggled with the concept of finding herself a celebrity.

At the Cheltenham Literature Festival this year, Jennifer talked so engagingly with Kirsty Young about some of the stories in Bonkers, and it was a joy to hear her chatting on stage. But the sense of keeping everything close to her chest remained. And while you love every second you spend reading Bonkers and hearing her talk about her life, you also come away feeling like you haven’t really learned very much about her. Which is surely what she wants!

But what shines through is a hilarious woman, who is living a life she loves. She’s a woman who loves her family, her animals and her friends. And the fact she comes across as a genuinely good egg is reinforced by the fact she has one of the longest marriages in showbiz, and her friendships have all endured through the decades.
Posted by Jane at Monday, October 14, 2013 No comments:

“A strange meeting in a churchyard sets in motion a chain of events that will shower a young man with money, break his troubled heart and lead him deep into a labyrinth of deception and discovery. Great Expectations is a story about transformation, loss and - ultimately - forgiveness.”

The team at Bristol Old Vic has pulled out the big guns for this reworking of the famous Charles Dickens tale, Great Expectations. This version is adapted and directed by Neil Bartlett, who graduated from the Bristol Old Vic Theatre School in 1981 – and this is his first Bristol production since that time. So there’s no pressure on him, then!

We flit between protagonist Pip as an adult and child – with the differences marked only by a lowly accent and rolled up trousers. But in a production that is marked by minimalist yet effective design (set, lighting, costume) this works well. In fact, the only thing that’s not minimal in this production is the booming sound effects.

Orphaned as so many of Dickens’ protagonists are, Pip is dragged up by his begrudging elder sister, who is married to a henpecked blacksmith. However, between the above-mentioned chance meeting with a man in a churchyard, and a later chance meeting with the bitterly insane Miss Havisham, Pip is set to walk along a bumpy road.

On the whole, I felt Neil Barlett pulled off a big achievement with this Bristol Old Vic production. As Pip, newcomer Tom Canton (who graduated from RADA in 2012) sometimes seems a little out of his depth in such a demanding role, but on the whole he was engaging and convincing, and has an impressive stage presence.

However, it was the supporting cast who really bring this production of Great Expectations to life. As the decaying Miss Havisham, Adoja Andoh was captivating and it was hard to take your eyes off her as she hobbled around the stage, trailing shreds of tatty dress behind her. And Miss Havisham’s protégée Estella (Laura Rees) was almost as entertaining – stomping and stropping around the stage like a possessed Tiny Tears doll.

But the two clear stars of this show are Tim Potters in the role of weasly lawyer Mr Jaggers, and Miltos Yerolemou (last seen here in A Midsummer Night's Dream) in the role of sycophantic Mr Pumblechook (who wins the, ahem, crown for the funniest moment of the play during the Christmas dinner scene). Throw in Yerolemou’s gently hilarious interpretation of Sarah Pocket, and hopefully we have ourselves a new Bristol Old Vic regular cast member. Fingers crossed!

Great Expectations is performed in the main theatre at Bristol Old Vic until 2 November. For further information and to book tickets, please click here.