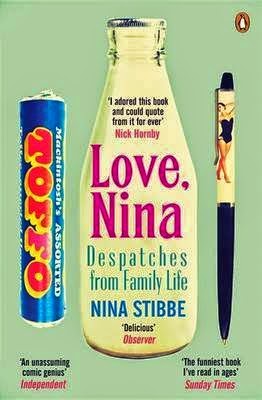 It’s not often that you read a book which you desperately don’t want to end, but Love, Nina is one of them.

Published a few months ago amid an enthusiastic flurry of glittering endorsements and rave reviews, the book failed to spark any interest in me until a friend sung the praises of Love, Nina on Facebook… and I gave in and ordered a copy.

Why was I reluctant? The book is a collection of letters that Nina Stibbe sent home to her sister Vic over several years during the early 1980s while Nina was nannying for a family in London. The book sounded so cutesy that it made me fear it would be a repeat of the horrible Guernsey Literary and Potato Peel Pie Society episode from a few years back (a collection of - fictional? – letters that was so sickly sweet it made me want to pull all my teeth out in one go).

Anyway, I was wrong. Love, Nina is not twee, sickly or tooth-hurty. It is delightful, warm, funny and fascinating in equal measures.

In 1982, Nina was the new, and ill-equipped, nanny for Mary-Kay Wilmers (founder and editor of the London Review of Books) and her two sons Sam and Will (whose father is film director Stephen Frears). You’ll need to get to grips with the Guardian-esque name-dropping fairly soon because frequent characters around the Wilmers’ kitchen table include Alan Bennett, Claire Tomalin and Michael Frayn.

But while the insights into the notoriously secretive Alan Bennett’s culinary skills are fascinating, it is the simple exchanges between the eccentric and kindly Mary-Kay, Nina and the boys which is at the root of this book. The snapshots of conversation that Nina records in her letters are seemingly irrelevant (about emptying the dishwasher, or how to swear in German) but happen every day all around the country, yet are lost forever as most people don’t stop to notice the funny things we say without trying.

And that is where Love, Nina succeeds so well – at making the everyday things we do seem so silly.

I can only think of one other book I’ve read in recent years that has made me feel as warm as this one did and that’s Auntie Mame: An Irreverent Escapade by Patrick Dennis from 1955 (not read it? Oh, please do). Yet the book that kept popping into my head while reading Love, Nina was the 1931 novel The Brontes Went To Woolworths by Rachel Ferguson. Why? In Ferguson’s charming novel the three Carne sisters invent friendships with the Bronte siblings (as well as a very real local judge) to help them through their everyday problems… and then the real and imaginary worlds come to a head. It’s a truly wonderful book.

Bristol Old Vic’s subterranean Studio space has been overtaken by it’s Young Company and transformed into a peaty woodland kingdom. Less a paradise than a waking nightmare, this reinterpretation of Ted Hughes’ 1967 poem Wodwo breathes new life into the age-old angst of being afraid of the dark.

The poem for Hughes marked a departure in his signature style – moving away from formal constraints and into a more fluid exploration of mythology. Which makes it a fitting choice for the Young Company to develop Wodwo when they also break away from their previous, more traditional theatre style. And what better time to make a bold statement than on their twentieth anniversary?

Performed in the round, Wodwo sets the scene with a raised bed of soil as the stage floor, an overhanging canopy of litter as the forest roof, and neon light tubes planted in the forest floor. As always with the Old Vic, nothing is what is seems.

A girl is wandering the forest searching for her father, and on her journey she encounters all kinds of creatures – frogs, bees, wolves and many more that are less easy to identify! The malleable cast transform into these beings through an array of neon sports clothing, bright lights and well placed Adidas for ears as they crouch, creep and pounce through the scenery. The neon light tubes become essential props, most effectively to create a mini wind tunnel as the drama heightens to become a storm.

The plot itself is sometimes rather hard to follow, consisting of scant speech, many made up words and sounds and a lot of physical performance, but the effect is no less impressive for it. Coming in at a tight 50 minutes, Wodwo is a whirlwind of a show that explores issues surrounding loss, identity and approval, and is a brave and interesting departure for the Young Company.

Wodwo is performed at Bristol Old Vic until August 16. For more information and to buy tickets, click here.
Posted by Jane at Friday, August 15, 2014 No comments: