'Fran & Leni' at The Assembly 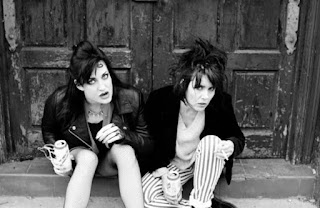 When I went up to the Edinburgh Fringe for five days last week, I did so without wearing my reviewing hat (a jaunty pink beret, since you ask). But in the days since I saw the two-handed play Fran & Leni at The Assembly, I’ve been unable to stop thinking and talking about it and now feel compelled to write a little something about it. So what follows is arguably less a review and perhaps more a musing on what was a very enjoyable and most thought-provoking piece.

Created by Old Trunk Theatre, Fran & Leni is written by Sadie Hasler who also performs the role of Leni. Fran is played by Old Trunk’s other half, Sarah Mayhew, who also directs the piece. And together they have created a back catalogue of work (judging by their website) that I would love to take a look at.

With literally thousands of shows on offer at the Edinburgh Fringe, it can be hard to know where to start - especially if you only have, as I did, five days. In that time I saw 18 shows, which I don’t think is too small an effort. While most of those were stand-up comedy (with my What The Frock! roots, this was unavoidable), I added in a handful of theatre shows this year, which made for a good balance against the constantly frivolous.

Fran & Leni could so easily have escaped my attention if it were not for journalist/musician Rhodri Marsden highlighting the play on his Facebook wall after he saw it the previous week. On a whim, I snapped up a ticket for myself. So thanks, Rhodri - without your tip off, I’d have missed this altogether. Which would have been awful.

In a nutshell, Fran & Leni is a play about female friendship - about how women stick together through the horrors and injustices life (and men) throws at them to come out on top. But it’s also about much more than that. Set in the late 1970s, our sheros meet at a north London school and bond over a shared love of music and a homelife they would both rather avoid. Perhaps inevitably given the period in which the play is set, the girls form a punk band called The Rips which briefly becomes a minor sensation.

Bookended by modern-day Leni giving a talk in Foyles bookshop to promote her recently published autobiography, Fran & Leni is a cleverly composed snapshot at a sequence of crucial events in the friends’ lives that led them to a silence of 15 years. Underpinning everything is a catalogue of crimes hurled at them by a range of men in their lives, be they fathers, managers or anything else.

Yet Hasler’s writing is subtle enough that this isn’t an hour of relentless feminist rantings (although that also sounds fun), but instead the delicacy with which she writes means that by the time the heartbreaking reveal comes the audience is left with a cold stomach, hairs on their arms tingling, and a righteous anger and indignation at what unfair and unequal atrocities women have to endure. Just for being women.

Punk is always an exciting time to look back at, and given the relative scarcity of women in punk compared to the volume of men in the industry (a musical genre that, despite its egalitarian suggestions, was still woefully sexist and exclusionary), Fran & Leni is clever enough to create this moment for two seemingly ordinary female characters to come out of nothing into something.