When Aardman Animations conceived the Gromit Unleashed 2 trail, they were probably largely focussed on finding a fun way for families to explore Bristol while generating some cash for The Grand Appeal. And that’s certainly happened. But they forgot to take into account another group of Gromit hunters: obsessive runners who are determined to find all 67 statues on foot. (NB: I’m using ‘Gromit’ to also include the Wallaces and Feathers. Accept it!)
With a two-month window, this seemed perfectly achievable. However, first I needed to exclude every single working day because I have a full-time job. I also needed to exclude four days in August when I was away. And several weekends when I had long races (and then periods before and after those races to rest). I also lost a week due to illness, which required some re-jigging. So: challenge accepted!

Zone One
The Bristol city centre Gromits (the zone one Gromits, if you will) were largely no trouble to tick off swiftly, aside from a pesky handful hidden away behind locked doors and restricted opening hours that don’t work well for those with jobs. The staff at the two Marriott hotels, which both had Gromits in their bars, managed not to look in any way disgusted at the sight of a sweaty, red-faced runner trudging in and out to pose for photos and click an app, which was very professional of them.


I live only a mile from Arnos Vale Cemetery but, due to their 5pm closing time, it was a massive logistical challenge to get their Gromit… unless I climbed into the cemetery over a wall that I’d heard mention of (but I’d rather not have to break in anywhere). In desperation to find time, the day before a 16-mile, stupidly hilly, off-road race, I tagged a few extra miles onto my Ashton Court parkrun pilgrimage to run in the opposite direction and get the Arnos Vale Cemetery Gromit. A 10-mile run in blazing heat the day before a tough race was perhaps ill advised but to get the Gromit it had to be done. Zone Two
A few after-work runs picked up the zone two-esque Gromits up on the Downs and by the Observatory, or out in Easton, Gloucester Road, Winterbourne and Hartcliffe etc.
Gromit took me to see some parts of Bristol that I might not otherwise have seen. While I found Hartcliffe Community Farm a very dejected place, to reach it I excitingly had to run across the former Whitchurch airfield (now a community park but soon to be trampled and turned into a housing estate), which was pretty special. Later research dug up a fascinating woman who will now be going in Volume Two of my book The Women Who Built Bristol and I would not have found her without Gromit.


And although the roads of Bradley Stoke are hardly known for their charm, I chose to get those two Gromits on the same humid night that everyone else watched the semi-finals of the men’s football. This meant that I enjoyed a somewhat 28 Days Later experience as the roads were virtually deserted with everyone tucked away indoors watching on a big screen as some men ran around a Russian field. However, the Aerospace Gromit necessitated TWO (two!) soul-sapping trips from Bedminster to Filton due to the fact it was locked away at 5pm every day (last entry at 4pm!)… which is, quite simply, unreasonable when most jobs require staff to be at their desks until 5.30pm.

Now… those pesky zone three outliers. The Gromits in places like Chew, Weston and Thornbury caused the biggest headaches if they were to be reached on foot… Thankfully, a few were near parkrun locations (I parkrun every Saturday, that’s the law), and while Eastville and Ashton Court are easy enough to run to from home, I decided that it was OK to drive to Chipping Sodbury and Thornbury, run the parkruns and then run straight on to get the local Gromits. Plus I was fifth woman at Thornbury parkrun that day, so that was a double triumph!

The second most challenging Gromits were the Weston-super-Mare and Puxton Park ones, with their unhelpfully early closing times (both of those Gromits are locked behind gates). However, we found out Weston Pier was staying open until 10pm on Friday nights throughout August and there was one just Friday that both my friend and I could do (in reality, Weston Pier decided to cancel the late night opening at the last minute... which they forgot to advertise, causing some frantic last minute changes of plans). But that still didn’t help us with Puxton Park and their 5.30pm closing time.
The plan had been to get the train to Weston and run the 20 miles home via Puxton Park… but the combined perils of the Gromits’ early closings, working hours and train timetables meant this was just not possible without taking an afternoon off work. So we had to admit defeat and take the train to Weston to get that Gromit moments before the grille was pulled in front of the Gromit, then run on to a closed Puxton Park, where we could climb over the five-bar gate despite and run down the driveway despite it being after closing time. The torrential driving rain that evening only added to the fun! (Note to Aardman: please don’t hide Gromits behind early closing gates!) However, the prize for the most challenging Gromit was the one at Chew Valley Lake, which is locked behind a gate after sunset (which is a vague time). Which is why one drizzly Sunday morning I got up early and spent three hours running a 16 mile round trip to Chew and back (including 1,728 feet of hills, which is the same as climbing the outside of the Shard in London… twice!) to get one solitary Gromit. And trust me, most of those roads were not made for running on - at least half the route had no pavements meaning you have to run on the road, which isn’t really safe… but there didn’t seem much alternative unless I drove, which defeated the object. (Note to Aardman: please put Gromits where we can safely access them without needing a car!)


I sound like I’m moaning but I’m not. I loved the Gromit trail and the challenge of getting them all on foot, even though at times it really was a logistical headache that required countless revisions. I enjoyed seeing the different designs the artists had come up with, and I’ve now bought my very own mini Gromit soft toy from the shop (he came with me on the run to collect the final two statues) - though the app wilfully refuses to let me scan him. I’ve enjoyed being taken on a tour of some parts of Bristol that I didn’t previously know, and I’ve also been pleased to be given some purpose to my long marathon training runs to save me from running up and down the Bristol to Bath cycle path every weekend! Plus, I’ve found at least one new Woman Who Built Bristol thanks to Gromit. I've also discovered a lovely new dog walking location for my real life dog at Manor Valley Woods (on my way back from Chew), and finally got to run on the Frome Valley Walkway (on my way to Winterbourne), which I fully intend to explore properly before autumn kicks in. When’s the next Aardman trail? Please make it soon!


Gromit stats: My favourite Gromit was the one at Blaise Castle featuring children’s book illustrations by Belle & Boo. I liked the nostalgic style of the illustrations that reminded me of books I’d enjoyed as a child (and still enjoy as an adult). My least favourite was the absolute dickhead in a fireman’s hat at Chew Valley Lake, largely because it was such a bloody pain - and not very safe - to get to (and I had to see a physio to get my calves unknotted after those punishing Dundry hills). Total mileage run: I ran 123 miles collecting Gromits (though I didn’t always take the most efficient route as sometimes I was deliberately trying to up my mileage, and for the much more remote ones sometimes I drove - and once took a train - to begin my run if it just wasn't realistic to run there from Bedminster). Number of other people run with: 24, including two group Gromit runs that I led with my running club. 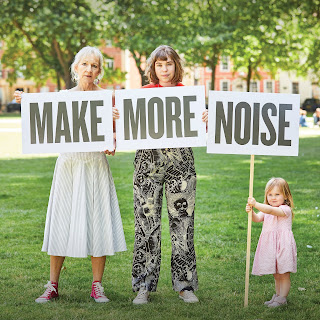 It can’t have escaped your attention that 2018 is the centenary year of when (some) women were finally entitled to vote. To mark this, Bristol Old Vic’s Young Company presents its tribute to the women of the past who shaped our future.


Taking its title from a famous Emmeline Pankhurst quote (“You have to make more noise than anybody else…”), Make More Noise is of the moment, melding one or two historical facts with present day problems, all of which concern women. Because the vote was just the start…


A range of strong women from history are referenced during this busy hour of theatre. There is the generic suffragette character as well as named sheroes such as Mexican artist Frida Kahlo, American birth control activist Margaret Sanger and Hollywood actor Uma Thurman.


It is the Uma Thurman section that I found the most affecting, with one of the cast speaking proudly about her love for Question Tarantino films, especially Pulp Fiction and the famous dancing scene with Mia Wallace and Vincent Vega. As the cast don ubiquitous white shirts over their black jeans to dance the twist to Chuck Berry’s You Never Can Tell, our narrator reminds us that Pulp Fiction was produced by Harvey Weinstein, who we now know sexually assaulted Uma during the film’s production. And watching that joyous, strong woman dance in that famous scene, knowing what we now know… we are invited to think about how Uma (playing Mia) must have felt at that time. And I found that very effecting.


Make More Noise is an energetic and enthusiastic tour through contemporary feminism. With a strong, all-female cast who dance, sing and shout their way through his/herstory, at times I did wonder who the intended audience was. The cast was all white and predominantly young (facts they acknowledge), but it seemed a stretch to believe that of the 300+ students at the Bristol Old Vic Theatre School there were no BAME women who could have filled some of these roles, especially given how self-conscious the script was in places to acknowledge ‘cis’ white privilege.


But that aside, it is always positive to see feminism embraced and celebrated by a new generation and Make More Noise is a triumphant celebration of where we have been as women and where we need to go next.

Make More Noise is being performed at Bristol Old Vic until 4 August 2018. For more info and to book tickets, click here.
Posted by Jane at Friday, August 03, 2018 No comments: