Bristol Proms: Bach In The Dark

Bach In The Dark – that sounds good whatever way you look at it. It’s nice alliteration, it’s a pleasing pun and it’s extremely intelligent music. Bingo.

For the launch night of the second annual Bristol Proms, held at the prestigious Bristol Old Vic, there are just four rules. Firstly, you may clap when you want. Secondly, you should take photos and tweet them during the performance. Thirdly, bring your drinks in to the theatre. And fourthly, do not shush those around you. So if you follow those rules, all will be well.

Having heard tales from last year’s inaugural Bristol Proms of academics being booted out for crowd surfing, I had high hopes that merry hell would break out in the cavernous – and devilishly warm – underground Studio at the King Street theatre. No such luck! Instead, the packed out audience was beautifully well behaved, with narry a cough or a sneeze to disrupt the peace.

After wowing the Bristol Proms audiences last year, conductor Tom Williams returned to Bristol this evening for Bach In The Dark, which, as the name suggests, was a performance of acoustic choral pieces sung almost entirely in pitch black – although, as Tom Morris indicated in his introduction, Williams has begun experimenting with the radical idea of low levels of lighting.

Joined by the Erebus Ensemble, Williams took the audience on a journey that flitted between heavily muted lighting to pitch darkness throughout the hour or so that we were under his spell. And with a walking choir of ten singers moving throughout the Studio, Williams led them – and us – through 12th Century choral pieces culminating in Bach’s Jesu Meine Freude, which lent a whole new meaning to the term ‘surround sound’.

The experience of listing to music in the absolute darkness is to take the music out of its original context and place the focus purely on the sound produced by the performers, and the result is a truly extra sensory experience. Initially, the darkness seemed disorientating and in a way distracting – I found myself wondering what was that, was that a movement, was that an infamous Old Vic ghost? And then I relaxed into it.

I forgot I was sitting in a hot underground room mostly surrounded by strangers, and became truly enveloped in the beautiful and ethereal sound being created just metres in front of me. My attention became focused and my mind stopped wandering, and I became completely absorbed in the music. So much so that when the lights were slightly raised for subsequent pieces, I actually found it much more difficult to concentrate than I had in the darkness.

Bach In The Dark was just one of a string of performances on the opening night of the Bristol Proms 2014, and it’s safe to assume that if all subsequent performances follow the same pattern then Bristol is set for a sterling week of musical adventures. 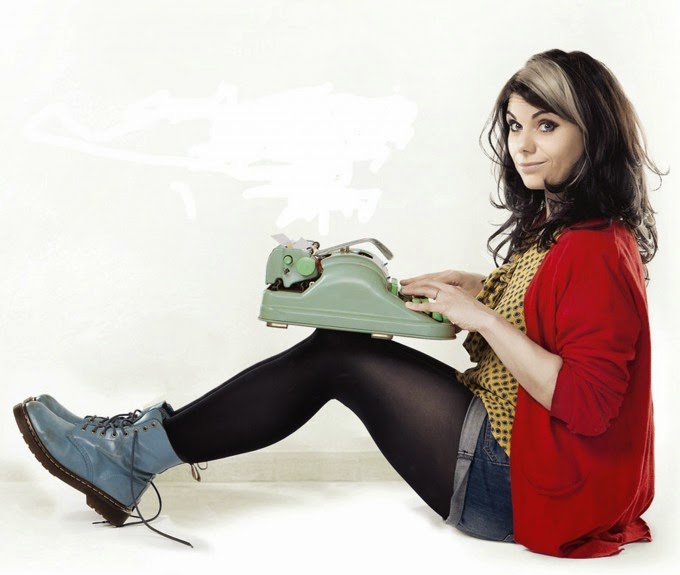 It’s possible that I was the only person in the Colston Hall who was not a fully paid up member of the Caitlin Moran Fan Club. I’m not sure if such an establishment exists, or if it’s simply a question of attempting to follow her on Twitter and hoping she doesn’t block you when you disagree with her.

When Caitlin arrived on stage in front of the sold-out 1,800 strong crowd, she was greeted by whoops and cheers befitting her self-given title of “feminist super god”. Because that’s why Caitlin is so popular… thanks to her bestselling book How To Be A Woman, she struck a chord with women everywhere who also thought “y’know, maybe it’s not right that women and men still aren’t equal”.

I have a problem with Caitlin. It’s less to do with her over-the-top big-sister chumminess, and more to do with her “Hey, dude, I’m gonna make feminism cool and everything I say is right, so don’t argue with me” stance. How To Be A Woman ended up in the palms of plenty of people who would never normally read a book about, yuck, feminism. It’s great that those people read a book that included chapters on lap dancing clubs, abortion or the choice to remain childfree. What was less great that what Caitlin presented as a book about contemporary feminism was actually just a book of her personal opinions.

So while How To Be A Woman got people who might not otherwise consider the issues of feminism to, y’know, consider feminist issues… there was a lot of unspoken pressure resting on those same people to take Caitlin’s opinions, run with them and decide whether or not they agreed. Because despite what Caitlin presents in How To Be A Woman, feminism isn’t just a question of saying: “Hey, dude, chuck on a Lady Gaga CD, light a fag and have a wank, ‘cos that’s what us bitches do all day” motif.

And lighting a fag is something Caitlin likes to talk about a lot, because smoking is apparently cool. She also likes to say “fuck, yeah” and “fuck, no” a lot – the way other people might say “umm” or “err” while thinking what to say next. But swearing is cool, kids. And she loves to namedrop her famous mates - within the first 15 minutes, she’d casually tossed such hip names as Bobby Gillespie, Benedict Cumberbatch, Richard Curtis, Emma Freud and Martin Carr into the mix. Yeah, we get it Caitlin, you have a much more glamorous life than we do. Your friends are way more interesting than ours are. We wish we were you, fuck, yeah etc.

But among all the bluster, the fags and the affected swears, Caitlin does hide a few sensible things in her talk. Her dissection of the Fifty Shades Of Grey narrative as a book that justifies sexual abuse by giving the victim a free iPad and a ride in a helicopter is spot on. Or she’ll suddenly throw out a line like: “What it is to be normal is to be a man. To be a woman is abnormal.” It’s just a shame that these brief moments of feminist good sense are followed by long, celeb-infused anecdotes about poo, menstrual blood or one of her many appearances on Newsnight. And being on Newsnight is something Caitlin likes to tell you about. A lot. Because she’s been on it. And she talked about poo on it. She’s cool.

Maybe this is deliberate. Maybe Caitlin is trying to soften the blows of what it is to be a woman in 2014 with her celeb stories? Or maybe, despite her working class roots, she’s spent so long living a comfortable life that she’s forgotten what life is like for the rest of us – those of us who don’t get to stay in a film director’s chateau after wrangling a free VIP pass to a festival.

For all her noise about wanting women to be equal to men and to embrace their chubby figures, she then comes out with the comment that the most important things a woman will say are “I love you” and “Is it a boy or a girl?” Instantly bringing a woman’s status back to that of girlfriend or mother. Nothing else. The celebration of feminist men made my toes curl up in embarrassment. Never mind the bit where Caitlin chummily told us to “celebrate and shag” the male feminists.

Ultimately, my problem with Caitlin is that her feminism is less a call to arms than an active call to doing nothing. She proudly says: “I’ve never gone to a feminist meeting or read a feminist book. I don’t need to.” And it’s that arrogance, that presumption that she knows it all, that underlines just how out of touch she is with what life is like for women today. And by women I don’t mean the millionaires with celebrity mates, I mean the real women: the Bristol women who juggle three jobs but still have to feed their kids from a food bank, the Bristol students who are told it’s empowering to pay their way through university by stripping, the Bristol women with mental health issues who are denied healthcare because the government is closing services down daily… the list is endless.

So no, definitely don’t do nothing. Because unless you’re a millionaire, you’re going to need to fight hard for what’s yours. Do read books, do go to meetings, do get out there and do stuff to incite change. Caitlin Moran is a good starting point if you’re new to feminist issues, but she is just a starting point. Never stop fighting for equality. Ever.