A Little F’d Up

It’s hard to decide what I like best about A Little F’d Up: Why Feminism Is Not a Dirty Word. Is it that the author, Julie Zeilinger, wrote this when she was just 18? Is it that Seal Press had the good sense to take a chance on a teenage feminist blogger and ask her to write a book? Is it that the resulting book is a damn near perfect example of what a book explaining feminism to teenagers should be? It’s probably all three. That and the fact it’s peppered with phrases like: “And that’s when the shit hit the fan.”

Julie started her blog, The F Bomb, in response to her own interest in feminism, and it rapidly grew into a platform for others to share and contribute ideas and articles. It’s a great space, and well worth checking out. Sure it has a US focus, as does A Little F’d Up, but then Julie is American, so what did you expect?

Split into six sections, the book opens with a lengthy and excitable exploration of the feminists who came before us, and leaves no stone unturned. What comes across is Julie’s enthusiasm for our feminist foremothers, and the reasons why she wants her readers to understand why it is so important to acknowledge and celebrate what’s already been done, and how we can use that to inform what we do in our own feminist activism. An approach I wholeheartedly agree with.

After having introduced her readers to the cream of the US feminist crop, Julie marches on to explain why feminism has a PR problem (and how to get around it), why the ‘us vs them’ philosophy is never going to work, the problems (and strengths) of internet feminism, some stark facts about global misogyny (FGM, sex trafficking etc), and also why feminism is the answer to every teenage girl’s problems.

The world has been crying out for a damn fine book, written by a sassy and clued-up teenager, about feminism for teenagers. Sure, Michaels Kimmel and Kaufman authored a great book last autumn called The Guy’s Guide to Feminism (also by Seal Press) but, as the name suggests, that’s geared more to steering our brothers along a supportive path. And there are several good books introducing feminism to women in their 20s or 30s, but these can seem alienating to teenage readers. More than anything, as Julie understands, the PR problem that feminism is irrelevant can be lessened by explaining to teenage girls exactly why feminism IS relevant to them. Because, heck, are they going to need feminism to get them through university, work and life.

PS – If you’re after a more UK-focused book to introduce young girls to the joy and power of feminism, keep an eye out for my upcoming review of The Exciting Life of Being a Woman, by Feminist Webs (HammerOn Press).
Posted by Jane at Thursday, June 21, 2012 No comments: 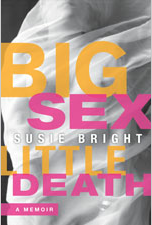 Susie Bright has made a career promoting sex-positive feminism to women and men, and Big Sex Little Death (Seal Press) is her newly published memoir.

And boy, what a life she’s had. From an abusive childhood, Susie ricocheted from parent to parent before decamping to the International Socialist party when she wasn’t even 18. She fully immersed herself in the world of politics and free love, before she was booted out while still a teenager.

Written in a brash, no-holds-barred style, Big Sex Little Death is loud, proud and in your face. Interspersed with a few saucy descriptions of Susie’s own sex life, the book is a kick in the face to those who say feminists are all frumpy and frigid – neither of those claims are true of Susie!

Susie and I may come at feminism from slightly different perspectives, but nonetheless I respect almost any woman who sees what they want, and goes and gets it. Big Sex Little Death is a fun and fascinating insight into one of the noisiest women in our recent feminist history. And like her achievements or not, this is an entertaining read.

Click here for more details about the book from Seal Press. Click here to visit Susie’s webpage.
Posted by Jane at Wednesday, June 06, 2012 No comments: