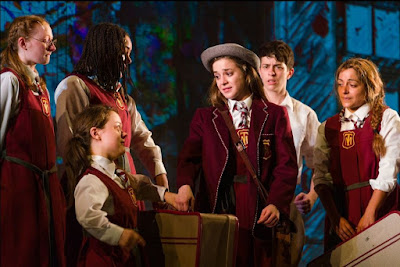 After the unprecedented success of the wonderful Wise Children, director Emma Rice’s theatre company of the same name was always going to have a tricky task with its follow up production, Malory Towers.

For the summer, the temporarily converted Passenger Shed by Bristol Temple Meads is home to this new production, while other shows continue at the King Street theatre as usual. Complete with a pop-up bookshop run by the delightful Storysmith, a fully stocked bar in the makeshift lobby and the erection of raked seating in the centre, the Passenger Shed is a truly versatile space. If a rather hot one… the recent heatwave has turned the venue into a massive oven, so you’d be advised to take a fan with you and a big bottle of water.

Enid Blyton’s much-loved school series Malory Towers is set in an all-girls boarding school in Cornwall, just after the end of the Second World War. Our plucky heroines are all dressed in boaters, blazers and tunics (in this heat!) as they board the train from Paddington, ready to embark on their new school adventure and all the hi-jinks that will entail. Stepping out of the pages of the books, our heroes are hot-headed Darrell Rivers (Izuka Hoyle), sensible Sally (Francesca Mills in one of the stand-out performances in the show), class clown Alicia (Renee Lamb), nervous Mary Lou (Rose Shalloo), musical Irene (Mirabelle Gremaud), horse-mad Bill (Vinnie Heaven) and spoilt brat Gwendoline (Rebecca Collingwood).

The plot of Malory Towers, which is advised for ages eight and upwards, is the simple one of a new class of schoolgirls arriving at boarding school, struggling with bullying and cliques, and putting on a ramshackle end-of-term production of A Midsummer’s Night’s Dream (presumably a dig from Rice at her former employers at the Globe Theatre). The anti-bullying/just-be-kind message feels rather rammed home, and the easy forgiveness the girls show to cruel Gwendoline is extraordinary - given just how wicked and nasty she has been. While the extremely diverse choice of the seven cast members (given the production is set in a 1940s English boarding school) is very self-aware and would have worked better if the production had been moved to a more contemporary period: there was no reason to keep this version of Malory Towers as a post-war production other than nostalgia. 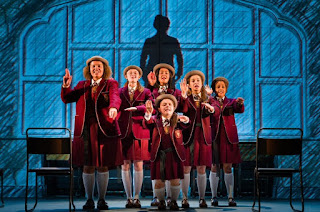 The seven young performers make up the entire cast, although the ever-wonderful Sheila Hancock voices their teacher Mrs Grayling (seen only in animation) and Kneehigh Theatre Company’s Mike Shepherd is the voice of the train announcer. However, the absence of any adults as either teachers or parents in a school setting is very noticeable. The occasional animated shadow of Mrs Grayling (as delightful as it is to hear Hancock) feels awkward, a bit like the heard-but-not-seen ineffectual figure of Nanny in Muppet Babies  - the headmistress displays no sense of rule or control over her students, never telling them off when they misbehave, never instructing them in a classroom, and never coming into their dormitory to tell them to just shut up and go to sleep! Having had an all-girls boarding school education myself, I recall the fear of knowing an adult was always just around the corner, waiting to march in and tell us off.

However, as always with an Emma Rice production, the music is exquisite throughout. And with the talented Ian Ross (who Kneeigh audiences will know and love well) as Director of Music, the score is in good hands.

I wanted to enjoy Malory Towers a little more than I did, especially based on the many strengths of Wise Children and Rice’s well-deserved reputation. But it felt like a show with too many unsubtle messages to deliver and not enough space to explore anything in any depth. That said, it was of course lots of fun, with a strong cast, excellent music and you certainly won’t leave the Passenger Shed feeling like you made the wrong choice to attend. Wise Children was always going to be a tough act to follow, and it will be very interesting to see where Rice takes Wise Children for its third production.

Malory Towers is performed at the Passenger Shed, the summer home of Bristol Old Vic this year, until 18 August. Click here for more information and to buy tickets.

Dead Dog in a Suitcase 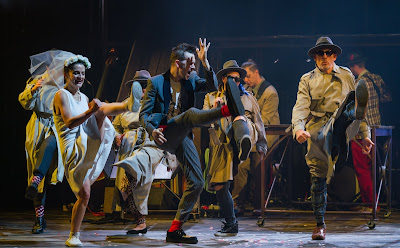 Good news, everyone. Kneehigh theatre company is back at Bristol Old Vic with a revival of its hit 2014 show Dead Dog in a Suitcase (and Other Love Songs). Anarchic, angry and apocalyptic, this re-telling of John Gay's 1728 satire The Beggar's Opera is a blistering assault on the senses. And a right royal kick up the bum.

After contract killer Macheath (a firey Dominic Marsh) shoots Mayor Goodman (arf, the only good man in the script) and his dog dead, we quickly find out he is acting on the orders of trumped-up millionaire tycoon Les Peachum (Martin Hyder) and his conniving wife (Rina Fatnia: quite possibly my favourite cast member in this production). But, oh, it gets much more complicated than that. Macheath is married to Peachum's daughter Polly (Angela Hardie), the police chief's daughter Lucy (Beverly Rudd) is pregnant with his child and he's finding it harder and harder to evade arrest.

Written by Kneehigh stalwart Carl Grose, Dead Dog is a lot of fun but it also has a lot of messages to tell us. Although a Kneehigh production often feels like the circus has come to town, there are always messages a-plenty. John Gay wrote The Beggar's Opera to lampoon the class divide, the injustices of society and political corruption of his day. Alas, such is the state of the world that Carl Grose could have got away with doing very little to update the production for a 2019 audience. So these societal injustices and hypocrisies are exactly what he shows in Dead Dog... in all their grotesque forms.

Composer Charles Hazelwood's music is, of course, bang on, and Kneehigh regular Patrycja Kujawska's performance is an absolute highlight in her role as the widowed Mrs Goodman: her '80s-esque electro-pop solo is spine-tingling, and her fevered violin performance at the climax is exquisite. The final scene with smoke, ticker tape, papers blowing into the auditorium and whirling, deafening, all-encompassing angry music reminded me of the KLF's anarchic performance at the BRITS in 1992 - where they stood in kilts and fired machine guns into the audience to a soundtrack of Extreme Noise Terror. And that's certainly not a bad thing.

There are a lot of things going for Dead Dog and you'd be advised to snap up a ticket and soak it all up for yourself. And if you're put off by the title, don't be. No dogs were harmed in the making of this show.


Dead Dog in a Suitcase is performed at Bristol Old Vic until July 13. Click here for more information and to buy tickets. 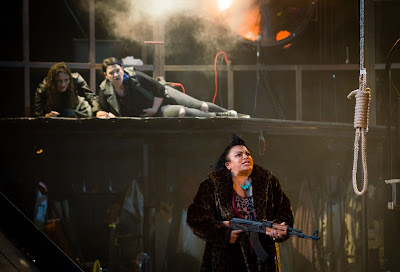