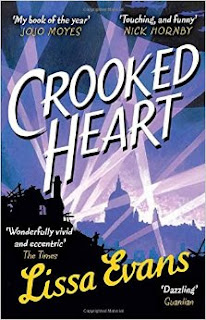 Like a cross between Elisabeth Roberts' fabulous 1973 story of a carefree childhood, All About Simon And His Grandmother, and Barbara Noble's 1946 tale of a wartime evacuee, Doreen, Lissa Evans' newest novel Crooked Heart is an utter joy.


While All About Simon And His Grandmother is a warm children’s story of a strange little boy and his madcap adventures with his eccentric and fun grandmother, Doreen is the tale of a wartime evacuee who is torn between missing her mother at home in London and settling into her new life with strangers in the countryside.


Our hero is ten-year-old Noel who is growing up with his eccentric and joyful godmother Matty, a former suffragette, in a book-filled, art-strewn home in Hampstead. Without hammering home the suffrage message, Crooked Heart subtly informs us of Matty’s fight alongside her sister suffragettes, her prison experiences and what she went through to earn her WSPU medals. All of this instills in Noel a strong grounding in wilful, intelligent rebellion.


But then the war comes, bringing death with it. And Noel is evacuated to the country and the care of single mother Vera, who lives with her lazy son, mute mother and does whatever she must to keep a roof over their heads. Initially dismissing Noel as not-very-bright due to his quietness, Vera soon comes to discover she has met a kindred spirit in him… one with whom she has much more in common that she would ever have first thought. Together, the two come up with a variety of schemes to live on just the wrong side of the law, and ultimately Noel comes to wrestle with his conscience when an elderly lady’s hard-won suffrage medals come into the equation.


Crooked Heart is a fun and fascinating, fast-paced story of survival and rebellion. Delightfully, Lissa Evans hasn’t resorted to creating a subplot of romance for Vera anywhere, which is an enormous relief in a market overloaded with books filled with pointless romantic subplots. And in the Dorothy Whipple vein of storytelling, Evans has subverted the interloper story to show that not all outsiders are bad news. Indeed, with Noel, Vera’s life improves a thousand fold.

'Every Good Deed' by Dorothy Whipple

What cannot be made better by reading a Dorothy Whipple book? A classic hot-water-bottle author, becoming engrossed in a Whipple means becoming enveloped in a warm and captivating story of wrong-doing, good vs bad and, more often than not, women triumphing over men. A Whipple is not necessarily well-written in the sense of an accepted literary classic, but it is definitely well-written in the sense of an immediately gripping and compelling story - which, to my mind, is far superior to the former idea. A Whipple is a guarantee of a good book.


So thank goodness that Persephone Books has been making it its business to diligently re-publish every single piece of Whipple writing it can get its hands on. (For clarity, Persephone publishes lots of other forgotten women writers as well - but Dorothy Whipple remains one of their consistent best-sellers). And having just read their latest collection of her short stories, Every Good Deed, I am now up to speed on their Whipple offerings so far. Which puts me in a good position to reliably inform you that Dorothy Whipple has never written a bad book.


The story that lends this latest collection its title, Every Good Deed, is actually a novella, coming in at just over 100 pages and occupying most of the first half of this volume. It’s a classic Whipple construction: two elderly and kind spinster sisters live in luxury in a nice English village. And then their home is overtaken by an outsider: an adopted wayward teenage girl who exploits their kindness and bank balance. Being good eggs, the sisters won’t give up on the girl, no matter how tempting it must be, and time and again they show how good triumphs over bad. Until the girl pushes them one step too far… Brilliant! Classic Whipple!


The remainder of this collection is filled with short stories that also follow the classic Whipple vein: a husband who tires of his exhausted wife and demanding kids so plans to run off with his mistress (the twist in this is magnificent); a middle-aged spinster who runs away to show her cruel relatives just what she’s capable of (triumph over adversity); the kind couple persuaded to run a boarding house that is then destroyed by one overbearing guest (the snowball effect of fate). And I defy you not to be broken-hearted by the bitterly cruel hand dealt in the grossly unfair story Susan, which i found the most powerful story in this whole collection.


Whether in her short stories of her long novels (and I delight in the great length of novels such as The Priory, They Were Sisters and Greenbanks), Whipple has a talent for cuckoo-in-the-nest stories: an outsider comes in and upsets the previous harmonious home with disastrous consequences. And nine times out of ten, that dastardly outsider will be a man (boo, hiss!). It’s wonderful, it’s compelling… it’s exactly what I want to read.


If you are yet to read a Whipple (and oh, how I envy you, how I would love to have all those books to read for the first time), then I urge you to start with Someone At A Distance (also published by Persephone). It was the book that got me reading again after a period of ill-health where I had been unable to focus my attention on any book at all for six months or more. I picked up a copy of Someone At A Distance, and was hooked within pages, finishing the entire book within days. A classic Whipple about the fragility of the family, the superficiality of the male psyche, and - of course - an interloper in the home.

It's probably not a mammoth surprise to discover that pop legend Sir Elton John is a massive collector of vintage photography. But what is a surprise is that in contrast to his somewhat garish and over-the-top tastes in fashion and interior decor (those who've seen at-home interviews with him will know exactly what I mean), Elton's taste in photography is spot on. And in the spirit of generosity, he has shared the highlights of his collection with the everyday public in this exhibition at London's Tate Modern.

The Radical Eye (which is on until 1 May 2017) focuses on photos from the first half of the 20th Century, when photographers were particularly experimental and adventurous with this still-new medium. And if you're really keen, you can even listen to the audio guide from Sir Elton himself as you wander around the exhibition - although I chose to go without.

There are some very famous photos in the exhibition, including Man Ray's 'Glass Tears' (above) and Dorothea Lange's powerful portrait of 'The Migrant Mother', which is surely one of the most captivating and heartbreaking pictures ever taken.

But there are plenty of lesser known and unusual pictures here, too. Including an absolutely tiny one of an underwater swimmer by Andre Kertesz, which is about the size of a postage stamp, but is utterly mesmerising. It's hard to believe that this image was taken in 1917 given how fresh and contemporary it seems today, 100 years on. The reflections of the water, and the dappled effect on the swimmer's skin is really extraordinary.

The Radical Eye is themed into different rooms around movement, experiments, portraits and so on, and there is also a five-minute film from Elton in which he explains where his passion for photography stemmed from, and which shows the pictures on display in his own home. Despite my rejection of the Elton audio guide, the film is actually a really useful and interesting tool to put the exhibition into context. Having watched the film, the exhibition is no longer the indulgent folly of an overly wealthy pop star with too much money on his hands, but becomes a means of expression for an ex-addict who has found a way of using other people's art to inspire him.

As a bonus, The Radical Eye is housed inside Tate Modern's new space The Tanks - well, it's new to me but it's clearly been a year or two since I last paid a visit here. This new space fits well with the original power station structure, and the raw concrete is actually very charming and soothing to spend time in.

For more information and to book tickets, click here. 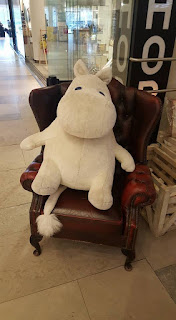 Who remembers the Moomins? Possibly better loved now than back when I was a child, these mysterious white creatures were (to me, at least) simply a cartoon on TV when I came home from school. But going into adulthood, Tove Jansson's adventurous and gentle souls have claimed a large chunk of our grown-up hearts, thanks in no small part to her wonderful story books and illustrations of the Moomin family and the magic and imagination behind them.

And now you can take a visit to Moominland yourself by visiting the lower ground floor of the Royal Festival Hall at London's Southbank Centre, and climbing through the pages hidden behind the giant book cover downstairs...

Guided by the fantastic Chloe, our group of about ten explorers (interestingly: all adult, all female) reverently followed Chloe through the pages of the huge book and onto the paths of Moominland.

Complete with a narration by Sandi Toksvig (who else?!), sound and lighting effects, and Chloe's bubbling enthusiasm, we spend an hour or so following in the footsteps of Moominpapa, Moominmama, Moomintroll, Little My and friends... we sit in their camp, we explore their woodlands, we find Tove Jansson's drawing room, we see magic golden butterflies, we travel on a raft... We see original drawings, Tove's own possessions (her handmade floral crown is a treat) and special Moomin models...

Adventures in Moominland is just wonderful. Seemingly such a simple creation, let yourself be carried away by the magic of it and you really will see where your imagination can take you, and discover the benefits of having a magical imaginary friend like Tove did. (And luckily, there are no signs of the Hattifatteners, who terrified me as a child!) 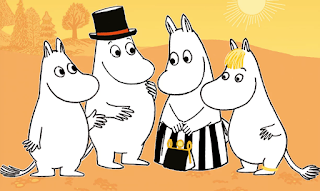