"The Cabinet of Linguistic Curiosities" 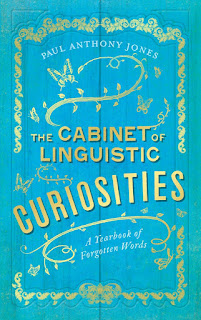 The latest book to land on my shelf from the mind of wordsmith Paul Anthony Jones is The Cabinet of Linguistic Curiosities. Jones tweets as @HaggardHawks, specialising in archaic and bizarre words that are all real but have somehow largely slipped through the net of daily use. Well, no more! Not with Jones keeping an eye out for them.

Inside The Cabinet, Jones has sourced a word for every day of the year, meaning that this literally is the book that keeps on giving. He's even gone so far as to find a reason (however tenuous) as to why each particular word has been assigned to the day he's chosen. Jones says he hopes to give you a "daily shot of vocabulary", which is an intense way of saying he's determined to bring us all up to his speed when it comes to Scrabble. (On which note, I would imagine playing Jones at Scrabble is ill-advised.)

Since today is October 24, I give you (well, Jones gives you) HARDIMENT:

Before it came to mean ‘resilient’ or ‘robust’, hardy meant ‘courageous’, and it’s from this original meaning that the word hardiment developed in the early fifteenth century. Originally simply another word for boldness or bravery, by the early 1500s hardiment had come to be used more specifically of a singular act of courage, audacity or heroism, and ultimately a daring stunt or exploit. And as daring exploits go, the one that took place today is up there with the most extraordinary – not least because of the somewhat unlikely character who performed it.

On 24 October 1901, the first person in history went over the edge of Niagara Falls in a barrel and survived. That person was sixty-three-year-old music teacher Annie Edson Taylor. Hoping the stunt would bring her fame and fortune, Taylor had an elongated oak and iron barrel especially constructed for her stunt that was lined with mattresses and fitted with a short breathing tube and safety straps to keep her in place. After she had clambered inside, the barrel was sealed, the pressure inside compressed using a bicycle pump and the hole plugged with a cork. It was then set adrift and bobbed its way down the Niagara River and over the Canadian side of the famous Horseshoe Falls. Twenty minutes later, the barrel was pulled from the waters by a rescue boat and Taylor was found alive and uninjured except for a small cut on her head. The stunt earned her the nickname ‘Queen of the Mist’ – but alas, not the fame and fortune she desired. She died in poverty in 1921.

What has the potential of being a murky, seedy, gloomy piece of class tourism is far from it. The Out of Joint Theatre Company revival of the classic 1982 play Rita, Sue and Bob, Too by Andrea Dunbar is as much a commentary on youth and optimism in 2017 as it is a statement about early '80s Thatcherite dissatisfaction and rising unemployment for the disenfranchised.

With Taj Atwal and Gemma Dobson assuming the roles of sassy 15-year-olds Rita and Sue, the play is already in good hands. These are two capable and assured actors who are more than at home playing the self-assured sheroes of the title. And while Hollyoaks' James Atherton has the, perhaps, unenviable task of playing the potentially unlikeable Bob, James somehow manages to makes us feel just a tad sorry for this discontented young man who is stuck in a loveless marriage and angry dissatisfaction with his lot.

Whether you've seen a previous version of this play or you've seen the seminal 1987 film directed by Alan Clarke, there's a strong chance you know the plot. But just in case you don't... Bradford schoolgirls Rita and Sue are seduced by the father of the children they babysit. And when I say 'seduce', I use the word loosely. While driving them home, Bob stops by the moors and asks the girls if they fancy a "jump", and they do. What follows is 10 minutes of delightfully uncomfortable stage sex while the three cast members have sex while squashed into the front of a makeshift car. This is the least sexy sex scene you will ever see, but it is a triumph of deadpan acting and bored one liners.

On paper, we should hate Bob. This is a 27-year-old married man with two young children who repeatedly seduces two underage girls. He's cheating on his wife (who angrily knows he's having it off with someone but can't work out who), he's breaking up the family home for his two children, he's knowingly committing rape by having sex with two minors... But Bob is such a pathetic character. He steadfastly refuses to believe he has done anything wrong. He certainly doesn't think he warrants the mouthful of abuse Sue's father (David Walker) delivers him. Poor old, Bob... (I say this with my tongue in my cheek).

But the reason why Rita, Sue and Bob, Too works is that to all intents and purposes it is Rita and Sue who are in control. While young, they're far from innocent. They may tell Bob they're virgins, but they're not. They have no belief initially that Bob will leave his wife Michelle (Samantha Robinson) for either of them. They're just bored. They're on the cusp of leaving school knowing there are no jobs for them once they finish their unpaid Youth Training Schemes in a boring factory. They're living life while they can. They're just having fun.

The loyalty of the two young women to each other is impressive, and this is the true core of Andrea Dunbar's play. Neither Rita nor Sue is bothered that they are sharing the same man. Neither Rita nor Sue is bothered when they find out that Bob has been meeting them both secretly for sex without the other one. Rita and Sue live very much in the moment... until Rita becomes pregnant. At which point, true to her loyalty to her best friend, Sue becomes righteous with indignation at the suggestion that she will carry on having sex with Bob, because now he's having a baby with Rita there are boundaries to respect. Wow!

Much has rightly been written about Andrea Dunbar's extraordinary rise as a playwright, as well as her tragically short life. Much of what Andrea wrote was, at least partly, autobiographical, and she grew up on the kind of estates that Rita and Sue did. Doubtless she knew a Rita and a Sue. And it's this distance from the private school upbringing, the university education, the well-off parents of the majority of writers that means Andrea actually knows what she's talking about. She was a writer who actually understood what it was like to be a woman.

Respect to Out of Joint Theatre for this production, and bravo for an excellent choice of casting. Rita, Sue and Bob, Too is only on at Bristol Old Vic until October 7, but the play continues to tour the UK until February 2018. Click here for more information.