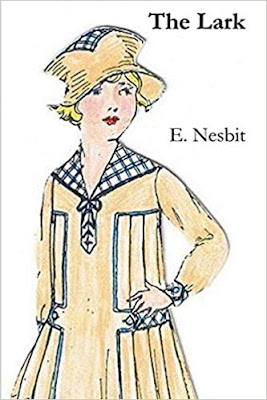 You know Edith Nesbit (1858-1924) even if you think you don't. She wrote The Railway Children, The Story of The Treasure Seekers (and several others about the Bastable children), The Story of the Amulet and, well, about 50 others. She mostly wrote for children but there were also a hefty number of books for adults, of which The Lark (1922) was the final one. It came just two years before her death. Although the cover I've reprinted above gives the impression this is another children's book, it really isn't - I just pinched this one off the internet as I thought it was a lovely cover. Below is the edition of The Lark that I read. Which looks a bit more grown-up. 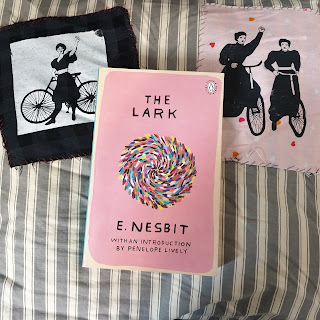 On the face of it, The Lark is a whimsical fantasy story. Two orphaned and delightful cousins, Jane and Lucilla, leave boarding school at the age of 19 or 20 (which seems rather old to still be at school but let's not quibble). Their mysterious guardian, whom they have never met, writes to say he is sending a car to pick them up, and when it arrives they are whisked to idyllic little Hope Cottage in the English countryside. Here they find a note from their guardian saying he has made a bad investment, lost their inheritance and done a runner. Eek.

Being girls educated in the 1910s, Jane and Lucilla are equipped with no useful skills with which to forge their own ways in the world. But both are wholesome, cheerful and endearing, and everything they need just falls at their feet. They start selling flowers from their garden to passers-by. And when they have depleted the garden's meagre supplies, they fall in with the kind folks who own - but seemingly don't live in - the big house up the road, who let them set up a flower shop on site and sell all the flowers from their plentiful garden. No strings attached. They end up in a range of - ultimately harmless - scrapes. It's a lark.

Everything seamlessly falls into place for these two. When they need a gardener, they stumble upon a dejected war hero who just so happens to be an unemployed gardener in need of a job and a home. When they need somewhere else to live and more outlets from which to earn a living, these also fall into their laps. Along with the necessary people to help them.

But don't be put off by the sickliness. The Lark is a sweet, comforting, reassuring read in times that are unpleasant, disorientating and confusing. The English countryside looms large in the story, as do old-fashioned values and the kindness of humanity. Community spirit is a large character here. And there is a lot we can draw from The Lark and its can-do attitude and apply to our own situation.

And of course, with E Nesbit we are in good hands. She knows how to tell a story, to create characters and write a page-turner of a plot. Some of her other books, eg the aforementioned Story of the Amulet, incorporated fantasy elements and magical storytelling, and while The Lark is realistic you can see the influence. Surely, only a fantasy writer would believe in a world so perfect as the one Jane and Lucilla fall into? In fact, E Nesbit's magical writing was said to be so groundbreaking that she was considered an influence on other writers who came after her, including PL Travers (who, of course, created Mary Poppins) and even Harry Potter writer JK Rowling.

PS - It might also be worth revisiting some of E Nesbit's books for children in the coming months, and I would push The Complete History of the Bastable Family (1928) to the top of your reading list if so. At more than 1,000 pages, this collection of the three books will keep you occupied for a fair while. 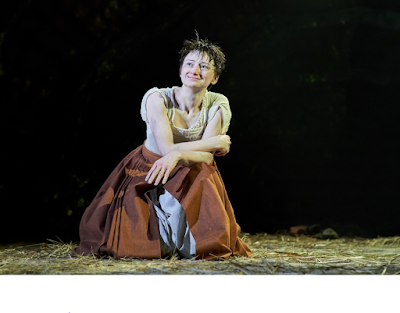