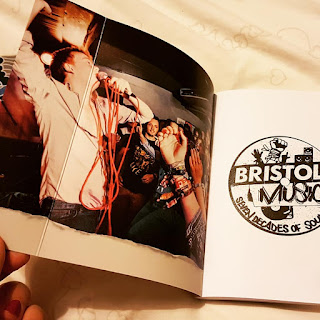 Bristol is a city known for several things (hot air balloons, street art, big old bridges, a very large ape up at the zoo), but chief among them is surely its distinct music scene. From 1950s’ crooner Russ Conway to contemporary chart botherer George Ezra and everyone in between, there is a strong sense of sound coming from this special city.


To tie in with a major exhibition at the city’s M Shed museum, music journalist and publisher Richard Jones has written Bristol Music: Seven Decades of Sound to collect together a snapshot of 70 years of Bristol’s distinctive hum.


While not claiming to be an exhaustive collection, there are certainly a lot of stones upturned in this picture-heavy collection - everyone from indie pop pioneers Sarah Records to self-styled Scrumpy’n’Western performers The Wurzels are in here, although there is inevitably a hefty lean towards the more recent trip hop acts.


Just like the exhibition that accompanies it, the Bristol Music book invites contributions and collaboration from readers who want to share their own memories of gigs and bands in Bristol, and their own stories. It’s a great little collection and a must-have for the book shelf of any discerning music fan in the South West.


You can buy a copy of Bristol Music direct from Tangent here.


And for more information on the M Shed exhibition, which runs until 30 September 2018, click here.
Posted by Jane at Friday, June 29, 2018 No comments:

'The Cause' comes to Bristol


A new play inspired by an imagined meeting between two great leaders of the women’s suffrage campaign comes to Bristol on 6 July. Tickets here.


The Cause depicts the explosive meeting of minds when Millicent Fawcett and Emmeline Pankhurst come together at a time when campaigns for women’s rights were at their most revolutionary and embattled.


Written by Natalie McGrath, and directed by Josie Sutciffe, The Cause explores the struggle, and the effects of campaigning for a cause by different methods. There was a divide between the violent direct action of the suffragettes and the peaceful constitutional means of the suffragists.


The play is produced by Dreadnought South West, a charity which connects individuals and communities through telling great and courageous stories about women.


Director Josie Sutcliffe said: "This play considers the impact of a lifetime of political campaigning on an individual, asking: ‘how far would you go for what you believe in?’ Many women gave up a great deal; home, family, children, and in some cases their own lives, to join the suffrage campaign. We hope that The Cause will provide a stimulus for debates on gender inequality, democracy and citizenship amongst many different groups within the communities we will visit."


Playwright Natalie McGrath said: "This tour feels timely with the current energy and visibility of women’s rights and gender equality campaigning that is taking place, and the centenary of the first votes for some women. As we developed the work, we met many women who have been campaigning for a long time. I really felt those stories that were shared with us at Dreadnought very deeply, and they have emerged as being at the heart of this play about Millicent Fawcett and Emmeline Pankhurst." 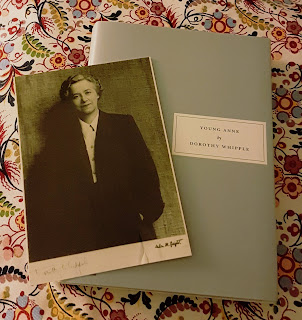 
For their final Whipple, Persephone have gone back to the beginning with Dorothy’s first ever book. Originally published in 1927, Young Anne is a clearly autobiographical book about Dorothy’s own formative relationship with the real-life George Owen who was killed in World War One. And as a tribute, the man who has stolen Anne’s heart is also called George. Which is a name the character dreams about calling her son, should she ever have one.


Young Anne follows the first 20 years or so of Anne Pritchard’s life, from girlhood to marriage. The only daughter in an Edwardian family that favours sons and practices Victorian values of showing the children no affection whatsoever, headstrong Anne is packed off to a convent in the hope it will quieten her down. Instead she becomes infatuated by the romanticism of Catholicism and the subject of young girls’ crushes. When her emotionally detached father dies and leaves Anne and her mother destitute, Anne is taken in by her witch of an aunt while her mother moves on rotation from one relative’s spare room to another, dependent on the kindness of others. The only constant and comfort in Anne’s life is the family’s maid Emily, who has known her since she was a baby.


Seeking financial independence, Emily defies her austere aunt and enrols on a secretarial course before taking an office job where she finds her husband. But all of this happens around the real heart of the story, and that is Anne’s love with her friend’s cousin George Yates. George is a bright, kind and sparky young man from a poor family, and he has a huge chip on his shoulder about his lack of wealth and his lower status than Anne’s. But Dorothy’s descriptions of the building love and passion between the two is convincing and when Anne suddenly breaks it off with George, the reader is left as confused as he is.


But being Dorothy Whipple, nothing is straightforward and love cannot run smoothly. While Young Anne has all the hallmarks of a fledgling novelist finding her voice, the distinctive sound of Dorothy Whipple can easily be heard in this compelling novel. While a Whipple can never be called a challenging read, they are always compulsive and I enjoyably sped through Young Anne in one weekend.


There’s a lot going on in Young Anne. While ostensibly a novel about young love and the influence it can have on the rest of your life, this is also a novel with sparks of feminism (Anne can’t understand why she must fold sheets while her brothers need not; she is frustrated at how hard it is for young women to be trained for employment; her mother becomes a burden to others when she is left widowed and homeless). But more than anything, this is evidently a story about Dorothy Whipple’s own love for George Owen.