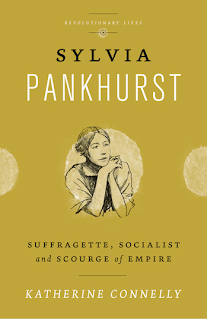 Despite engendering mixed feelings in many who have studied her, Sylvia Pankhurst was undeniably a woman who got things done. Perhaps most well remembered for her hugely significant role in helping to win UK women the vote, Sylvia was also a dominant campaigner against oppression and injustice further afield.

As part of Pluto Books’ Revolutionary Lives series, Katherine Connelly has produced a fantastically readable and informative biography and study of Sylvia – which refreshingly doesn’t simply focus on her suffrage activities, but also devotes a lot of time to her less well-known activism. And for all the reading around the Pankhursts that I’ve done in recent years, Connelly’s book - Sylvia Pankhurst: Suffragette, Socialist and Scourge of Empire - taught me plenty of things I didn’t previously know. Confirming that there is still more to be said on the fascinating and important character of Sylvia Pankhurst.

Most people are acquainted with Sylvia’s role as a suffragette. As the middle daughter of Emmeline Pankhurst (Christabel was elder, and Adela was younger), Sylvia for a long time lived in the shadow of the much adored Christabel. Ultimately, this was to be in Sylvia’s favour as she was more free to go in her own direction without such a close watch from her mother.

When the suffrage campaign simmered down during wartime, Sylvia became separated from her family as she disagreed with their support for the war. Instead, Sylvia opposed the war and set to work to support the women left behind and help those who found themselves in poverty because of the war – particularly fighting for the rights of soldiers’ wives.

In later years. Sylvia became involved with communism and soon evolved into an important figure in the movement, speaking at events worldwide. Finally, Sylvia moved to Ethiopia, where she adopted an anti-British attitude, which led her to be under surveillance by MI5.

Even Sylvia’s son Professor Richard Pankhurst has given this new book his seal of approval, stating: “Katherine Connelly has written an important work on my mother.”

Sylvia Pankhurst: Suffragette, Socialist and Scourge of Empire is neatly arranged in hugely informative chapters covering Sylvia’s various different campaigns, and the whole package is gripping and compulsive. It’s an absolute must for anybody looking to find out more about this significant lefty campaigner.

You can listen online to a fascinating talk with Connelly, which she gave at the Bishopsgate Institute about the book. Follow this link.

Click here for more information on the excellent Revolutionary Lives series, which covers some truly remarkable people. One to particularly watch out for is the publication of Ellen Wilkinson’s biography next February.

Why I Hate The Word 'Comedienne'

It’s only a word, it’s only a little thing. But since you can only eat an elephant in small bites (as the saying goes), let’s take things one mouthful at a time.

And one of the little things that gets my goat is the use of the word ‘comedienne’ to describe a woman who makes people laugh. It implies that the originally male word ‘comedian’ is superior, and therefore anything else is a poor substitute. It implies a sense of otherness with a female comedian, a sense of second best, it gives a hint of frailty, and suggests that a woman telling jokes is somehow different to a man telling jokes. Which is balls.

I run an all-female comedy night called What The Frock! Comedy. Not because I want to be mean and exclude all the boy comedians from the fun, but because for so long most of the women comedians have been excluded from the comedy circuit (on average, only 4% of all acts booked on comedy nights in the UK will be female. It’s 2013!).

Because I make this deliberate gender distinction in my booking policy, I inevitably spend a lot of time reading cuttings about my acts that refers to them as ‘comediennes’. Now don’t get me wrong – I am DELIGHTED when anybody writes anything about my events, I am over the frickin’ moon. But, given the opportunity, I do find myself saying to journalists who contact me: “I don’t want to be annoying, and I’m not going to ask to approve the copy… but please call the acts ‘comedians’ and not ‘comediennes’. It’s about what comes out of their gob, not what their gob looks like.” On the whole, they listen.

But last week the word seemed to come up a lot. Maybe that was because What The Frock! put on a big show that generated a lot of press – in print, on radio and on the telly box. Wooh! But in every instance, at some point the acts were called ‘comediennes’. Even by female journalists (journalistas?).

Every single one of the 100+ acts I’ve worked with to date refers to herself as a ‘comedian’. Some make a point of saying they actively distance themselves from the word ‘comedienne’, while others say they don’t like the word but they’d rather somebody wrote something about them than nothing at all.

Which leads me to say that the language used to describe female acts also baffles me sometimes. For instance, we had Lucy Porter on last week, who was variously described in the local press as “sweet voiced”, “a familiar funny maker” and “sweetly demeanored”, while previously Tiffany Stevenson was said to provide “amiable and chatty banter”. All phrases to imply maternal hugs or bland giggles. There’s an interview with Bridget Christie in the current issue of Vogue with the headline “Pretty Funny” (not only would that headline never go with a piece about a male comedian, but it also implies that Bridget’s appearance is somehow relevant, and that it is surprising that she should be amusing. Being a laydee and that).

I know there are bigger things to worry about, but when we are still giving the same job different words depending on the gender of the person doing it, we still need to think about how much further we have to go in the equality battle.

Women typically get short shrift in the comedy industry – thanks to venues that will only book a maximum of one woman a night, panel shows that ignore them altogether, and stadium tours populated almost exclusively by the boys. And don’t get me started on how few female comedians are able to put out comedy DVDs.

And if people keep on calling them ‘comediennes’ rather than ’comedians’, things aren’t going to change any time soon. I’m not for a second implying this is the only problem women face in the comedy industry, far from it. But the nuances implied by a distinctively lesser word, one that is feminine and dainty in its sound and appearance, suggest that a gurl comedian is going to be a disappointment. When, frankly, that’s just poppycock. 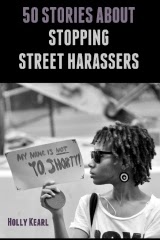 I can guarantee it’s happened to every woman reading this. You’re walking down the street, minding your own business and in a perfectly fine mood. When some man (or men) yell at you from the safety of their car/van/scaffold/whatever… they yell something about how hot you look, how much they want to screw you, or simply advise that you ‘cheer up, love’. And that’s it… your mood is ruined for the rest of the day. Your personal space has been invaded, your appearance has been critiqued, your personality reduced to your appearance.

Holly Kearl founded Stop Street Harassment in the US in 2008. What began as a blog has grown and grown, and in 2012 it became an incorporated company. The aims of Stop Street Harassment are to raise awareness of how damaging and intimidating street harassment is for its subjects, and for people to share their stories of how they’ve been affected by – or responded to – their harassers.

As part of this, Holly has recently produced this new book, 50 Stories About Stopping Street Harassers (which you can buy for $10 plus postage from this link, with proceeds goingtowards her organisation). As well as the 50 stories you’d expect given the title (of which, I’m proud to say, my own story is the first), Holly has included short essays about what street harassment is, suggestions for how to respond when it happens to you, and links for more information and advice.

It’s a great book, and really empowering for the 80% of women around the world who will experience street harassment as part of their day-to-day lives. 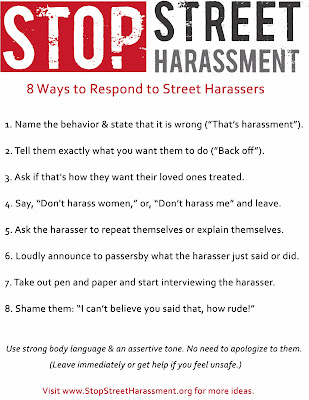 Enid Bagnold’s 1938 novel The Squire is apparently the only novel ever published about birth. By which the publishers Persephone mean that although there have been plenty of novels about women who have given birth, none have covered the days before and after the birth in such fine detail as The Squire.

Although there is no defined narrative arc in The Squire – rather, it is a series of interlocking events surrounding the act of birth – there is still a drive throughout the novel to hold the reader’s attention. Some critics have claimed the book is reminiscent of Virginia Woolf’s To The Lighthouse, and you can indeed see the almost stream of consciousness style throughout.

Enid Bagnold’s novel is written extremely closely – there is so much detail that you feel almost claustrophobic within the pages. This is surely intentional, to mirror the building pressure the squire of the title must be feeling in the final days of her pregnancy when she wants everything to be just so. And there is also a strong sense of the British spirit of ‘just getting on with things’, which is surely what the squire was thinking.

For instance, throughout chapter six there is a debate between the squire and her friend Caroline about plants, and those they like and dislike. Which is a loose way to discuss things ending and beginning, with plants being a metaphor for the existing children and the imminent baby, as well as the frustrations for the squire of her servants.

What struck me as particularly interesting about The Squire is the way it approaches the intricacies of household management between the wars. The squire is consumed with handling her frustrating staff and the difficulties of replacing them with suitable people. And there is the constant anxiety and irritation for her of dealing with the problem of people who she pays to make her life easier. The minutiae of the middle classes is apparent on every page, and that in itself is a fascinating opportunity to glimpse into a bygone age.