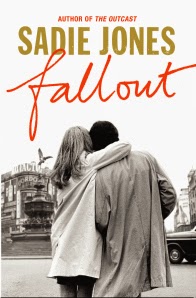 There have been quite a few novels wafted under my nose recently set in London’s glamorous yet seedy past… A Vision of Loveliness by Louise Levene (published in 2011, about an aspiring model in 1960s London), Ask Alice by DJ Taylor (published in 2010, about the secrets of a 1930s nightclub hostess), to name just two that I’ve read recently. And Sadie Jones’ new novel The Fallout (2014, set in 1970s theatreland) adds to this popular canon.

But that doesn’t mean it’s a bad thing. I love these sort of novels. They conjure up a romantic notion of a past I’m too young to remember but that I like to fondly remember in a way that was probably never true for those who lived through it. London’s Soho is one of those areas that may be geographically small but has such evocative history running through it – the seedy sex industry, the glamour of nightclubs and theatres, the romanticism of it regurgitated in the memoirs of pop stars and artists who spent their time drinking and taking drugs in it.

Sadie Jones’ new novel is set in the late 1960s and early 1970s in London’s burgeoning fringe theatre world. Our protagonist Luke – an aspiring young play writer - has decamped to the capital to escape his depressed family life up north, where it really is grim. He teams up with ambitious theatre producer Paul and his stoical girlfriend Leigh, and the trio set up a radical theatre group. Blighted by Luke’s insatiable sexual appetite, and his torment over his anger and regret about his abandoned parents, the trio freefall into a spiral of longing, lust and ambition.

Luke’s story is contrasted with that of hopelessly unhappy actor Nina Jacobs, whose beauty overrides her actual talent. While we see Luke moving from a part-time job as a dustman to a full-time post as acclaimed writing genius, we watch Nina move from being hen-pecked by her unsympathetic mother to being abused by her homosexual husband.

The Fallout is a compelling read and I was gripped – caught up in the romanticism of the era and the characters, willing them to pair up with their apt other halves, and feeling their frustrations when they let themselves down. Genuinely unable to put the book down, I swept through it in two days – reading it in the bath, over lunches and on buses.

Sadie Jones recreates the stifled atmospheres of impoverished but hopeful London with (I can only presume) precision, and you completely feel yourself enveloped in the cramped flats, listening to the characters through the bedroom walls and inhaling the stench of stew in the kitchens. The squalid sensations of Luke, Paul and Leigh’s flats contrasts with the extravagant flaunt of Nina and Tony’s sham house, and it was easy to imagine where you’d rather hang out if you really knew these people. Although that said, only Leigh comes out of The Fallout as the character you’d want to spend any time with – the others being spineless, selfish creatures.

After devouring The Fallout, I’m pushing Sadie Jones' back catalogue to the top of my ‘to read next’ list.

Sadie Jones is speaking about The Fallout at Foyles in Bristol on May 20 as part of the Bristol Festival of Ideas. Tickets are £4 in advance. More information is on this link.