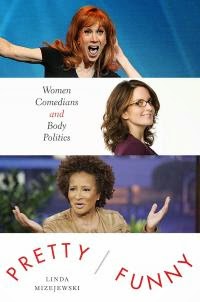 When women in comedy are still judged for their looks before their jokes, you know there’s a long way to go. While male comedians clog up the panels on TV and radio quizzes, the token woman is usually only there because she’s a pretty TV presenter or a giggly pop star – she’s rarely there for her wit alone, and she’s almost never there if she’s not conventionally beautiful.

In her new book Pretty Funny: Women Comedians and Body Politics, Linda Mizejewski – professor of Women’s, Gender and Sexuality Studies at the Ohio State University in Columbus – rips apart the notion that there are no funny women, and pours scorn on the idea that funny women should be judged only by their appearance.

Pretty Funny is very accessible for the non-academic reader, and is an enjoyable stomp through the sexist battlefield of the comedy circuit. With chapters focussing specifically on five of the finest acts currently working in the States (Kathy Griffin, Tina Fey, Wanda Sykes, Ellen De Generes and Margaret Cho), Mizejewski also includes  fantastic chapter setting the scene and placing all of this in context. Because of course those five comedians don’t stand in isolation – they follow in a long tradition of funny women that includes too many people to name, but would include Lucille Ball, Joan Rivers, Fanny Brice and Carol Burnett.

All of these five women are producing excitingly feminist comedy in a world that traditionally sees feminists as ugly man-hating hags with no sense of humour. And they’re coming through at a time when there’s a surge in opportunities for women who not only perform comedy to some man’s script and direction, but now invariably also write, produce and direct the comedy – meaning they’re in full control. By deliberately including lesbian and black comedians in her five profiles, Mizejewski is also drawing a firm line under the fact that what is assumed to be ‘pretty’ is a long way from the Disney princess definition of the word.


Pretty Funny is a really engaging, fun and enlivening book. It’ll make you see your favourite comedians in a different way, and will also widen out the vision with which you look at the world of pop culture in general. We’re living in an age when women are finally starting to be taken more seriously – and in what better industry to show how serious women are that in comedy? Exactly.
Posted by Jane at Sunday, April 27, 2014