When I began organising comedy nights by women comedians in January, I anticipated a slew of ‘what about teh menz?’ moaning from the type of men who enjoy diminishing the work of women. This is because after several years as a feminist activist, I’ve grown used to hearing the same arguments about how downtrodden men are and why aren’t feminists campaigning about that?

However, regarding the comedy nights, I received only one comment from one man suggesting that perhaps it was ‘patronising’ to put on a comedy night featuring women comedians. He is entitled to his opinion, but because the other 99% of the women and men who were aware of the event were 100% supportive, enthusiastic and bought tickets in droves, I decided to push on and launch What The Frock! anyway.

And launch it did, with a sold-out event in May. It’s become such a success that What The Frock! is going monthly from January, and almost every day I get requests from people (even, gasp, men) to bring What The Frock! to their city.

That said, in the last few days, there’s been a lone internet crusader (see screengrabs above) who is banging the gong about the ‘gender apartheid’, ‘sexism’ and ‘misandry’ of What The Frock!, because it is only promoting women comedians. His main bone of contention seems to be that there are, in name, no comedy nights featuring only male comedians. (NB: You may need to read that sentence again to be sure you read it right.) OK? Now, please read on for the hard-to-argue-with stats (although I’m sure one or two will try).

Now, I’m going to do a little test. I’m going to randomly search for 10 listings for comedy clubs around the UK who have events on tonight (Friday, September 28) to see who they’ve got on, and see what kind of gender balance there is. I will search for one club in 10 UK cities. To avoid accusations of fixing the answers, I will go to Google and type in ‘[city name] comedy club’, then go to the website of the first listed club with an event on today. The results are alphabetical by city.


So, of that straw poll from 10 randomly selected clubs, there are a total of 48 comedians performing.

In only one instance is a woman headlining (Sally-Anne Hayward), and that is because she is doing a one-person show!

So, dear doubters and hard-done-by men, tell me again that there are no men-only comedy clubs in the UK.

And tell me again that it is ‘sexist’ to have brands such as Funny Women, Laughing Cows, What TheFrock! etc that promote women comedians.

And please try harder to make your arguments for ‘misandry’ stand up straight. Because based on the solid figures above, your arguments are as limp as (skips over obvious analogy), err, bizkits.

Please note: the term ‘gender apartheid’ used in this context (eg this article) is extremely offensive considering the term's actual meaning. That is the economic and social sexual discrimination of women in the non-Western world, including the practices of legally killing adulterous wives in Syria and Haiti, wife beating in Nigeria, and legal kidnapping and marriage of women in Guatemala and Lebanon. So please think more carefully before misusing such an emotive term.

Perhaps those who throw the term ‘gender apartheid’ around like it’s clever or funny should read this article from women in SaudiArabia about what gender apartheid really means. And then think again before using it so flippantly.

PS: In answer to the question posed in the opening paragraph: if you are one of those men who are genuinely worried about how hard done by your gender is, why don’t you mobilise yourself, with some likeminded friends, to take action to raise awareness of the gross inequalities men face in life, rather than expecting us nasty  ‘man-hating’, ‘ugly’, ‘lesbian’, ‘feminazis’ to do it for you? Positive campaigning is an extremely empowering action, and you might realise just how privileged you were in the first place. Now, go and change the flat tyre on my car before you mow the lawn, there's a dear (see screengrab below). 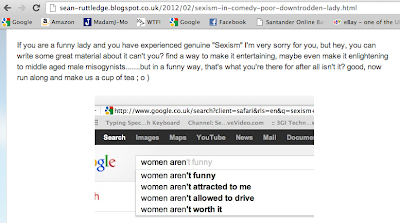