In which sexism in comedy is mansplained

There’s a lone voice in the crusade to end these beastly women-only comedy nights. And that voice belongs to Sean Ruttledge – a man who, according to his 'official blog' (not that I could find an unofficial one), is “the man of over 9000 voices”. But there’s only one voice coming through loud and clear on his blog, and that is the one saying he knows best and women must be told (especially the ugly ones).

Sean has spent a lot of time and energy on his campaign to put a stop to women-only comedy nights – although why the issue threatens him so much remains unclear. Though he does seem to have made a habit of living his life online, and having a record for the most number of accounts blocked from YouTube (at least 110).

Sean is so sick of talking about it that he’s written a bog post, stating his views on the situation. He’s called the post: “’Sexism’ in comedy, those poor downtrodden lady comics: The sad plight of female comedians”. I think it’s clear where he’s pitching his stall. But let’s read on because Sean is a comedian by trade and his post is nothing if not entertaining.

In it he says:

'Self-victimise'. Isn't that another way of saying 'victim blaming'? Regardless, what would Sean expect from 'manipulative' women folk, albeit ones who he acknowledges might be more 'political' then teh menz? Which, hang on, surely suggests women are better informed of social and economical injustices?

Sean goes on to say that he thinks sexism in the comedy industry is indeed rife. But it’s not the men who are being sexist. Nope! It’s the bloody women, with their man-hating women-only gigs who are the sexist ones. (I doubt Sean’s stopped to consider that maybe the women-only gigs were created as a result of the difficulty for women to get bookings, regardless of talent or, obviously, looks – an issue he goes on to discuss later in his post. Yes, really, that's how serious he is.)

Explaining why it is the women (sorry, ‘lady comediennes’ in Sean’s language) who are the sexist ones in the comedy world, Sean says: 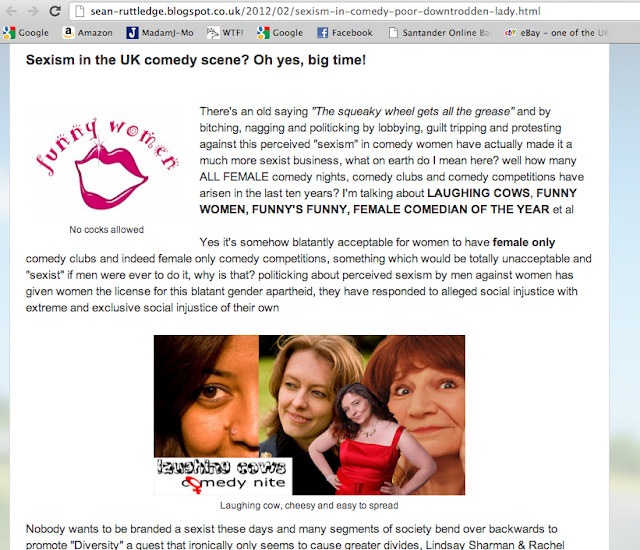 Wow! Those are some strong claims in there. Firstly, while it’s true there are a handful of women-only comedy clubs (as in women-only performers, but anyone is welcome in the audience), does Sean realise that – even if they don’t label themselves as such – many of the comedy clubs in the UK are male-only comedy clubs (eg: 60% of the clubs listed in my previous post have exclusively men on their bills tonight - September 28).

Where Sean’s already-weak argument really falls apart is when he starts to discredit various female comedians because of their appearance. Under a photo of Sarah Millican’s DVD, he has inexplicably inserted the caption: “Jo Brand, funny but you wouldn’t shag her”. 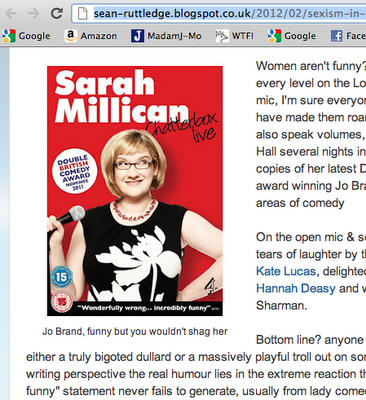 Under a photo of Kate Smurthwaite reads the offensive caption: “Smurthwaite, ‘really pretty’”, implying Sean believes the opposite. But then, Kate is a person about whom Sean has written the following: 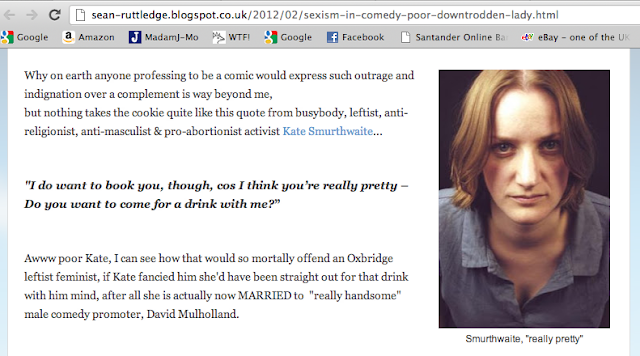 From this, aside from the unnecessary rudeness about Kate, we can learn that as well as not liking female-only comedy events, Sean's own leanings are towards right-wing politics, men's rights and he's definitely anti-choice.

In the meantime, I look forward to hearing from Bristol City Council, who Sean intends to report me to for the crime of holding an event that only promotes women comedians.

PS: You don't know what mansplaining is? Click here.