Iron Jawed Angels – a film about US suffrage 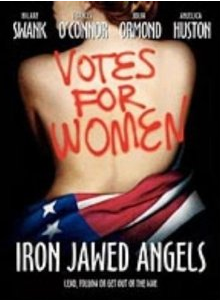 There are many oddities about this 2004 HBO film, which looks like it was made for TV. The most glaring of which is the jarring music, which at best can be described as sub-standard ‘90s trip hop: whatever you call it, it’s achingly out of place on a period film set in the late 1910s that focuses on the American fight for suffrage.
Iron Jawed Angels manages a double casting whammy with both Hilary Swank and Angelica Houston in strong roles, supported well by Frances O’Connor and Julia Ormond. The film is a biopic of Alice Paul (played by Swank), who led the campaign in America to ensure all women were granted the vote, and not just women in certain states.
While the story is fascinating, Iron Jawed Angels is by no means a good film! It is an extremely strangely constructed and produced film.
Hilary Swank is a fantastic actress, but she seems oddly cast as Alice Paul – her face and voice are too contemporary for the role. Similarly, the other suffragettes in her party look like 21st Century women playing dress-up in 19th Century costumes – which, in essence, they are.
And then there is the bizarre use of editing techniques: cross fades and jump cuts are painfully out of step in a period film, but they’re used ad nauseum here. And the mise-en-scene of the costumes is nothing more than grating – the actresses are dressed in glamorous 1910s outfits that seem far removed from clothes that women of their class and income would have worn. And the screen time and narrative pressure placed on Alice Paul’s blinkin’ pink hat are so over emphasised that it becomes excruciating. It’s certainly not subtle, as mise-en-scene should be.
And the sound? I found it hard to detach from the music, which was comical in its inappropriateness, and extremely distracting from the rest of the film. About half way through, I contemplated muting the DVD and switching the subtitles on in order to simply make the noise stop.
In short – as a film about the American suffrage movement, Iron Jawed Angels is (mostly) well acted and extremely interesting. But as a film in its own right, it is poorly directed, unsympathetically edited and horrifically soundtracked. I can’t think what would ever make me watch it again.
(As a footnote: I’ve heard rumours that the team behind Made In Dagenham are currently in the early stages of producing a film about the British suffrage campaign, which will be written by Abi Morgan – who scripted The Iron Lady and The Hour. More news on this as and when I hear it.)
Posted by Jane at Sunday, February 12, 2012