Feminism At The Movies 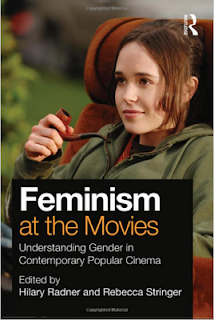 One of the wonderful things about this so-called third wave of feminism is the resurgence in academic books on the subject, tackled from a variety of angles. A small number of these books have been reviewed on this blog (far from all, though!), and I’m pleased to introduce another – particularly because this one focuses on the cinematic slant of feminism, a subject which I studied at MA level.
Feminism At the Movies: Understanding Gender In Contemporary Popular Cinema, is edited by Hilary Radner and Rebecca Stringer, and published by Routledge in 2011. It’s by the far the most comprehensive collection of essays on this topic I’ve seen, and takes in 21 essays by contributing scholars. These are loosely grouped into five categories: masculinity, a space for women, consumer culture, family and violence.
What Feminism At The Movies does so well, regardless of contributor, is that it makes each essay so accessible. This may be an academic textbook, but it is not weighted with elitist jargon and unfriendly terms, yet it is still beautifully referenced and prompts the further research and discussion you’d expect of a well-constructed argument.
Standout chapters include Rebecca Stringer’s comparisons of The Brave One and Hard Candy as examples of violent young women; Heather Brook’s perfectly captured critique of the wave of wedding films; and Michael DeAngelis’ sensitive examination of A Single Man.
More poignantly to topics currently in the news, David Hansen-Miller and Rosalind Gill’s chapter about “lad flicks” seemed particularly apt. They argue that this genre (including films such as Wedding Crashers, You, Me and Dupree, Superbad and Knocked Up) are emblematic of the misogynistic culture generated by the kind of high street misogyny that it sadly so prevalent nowadays. That in itself isn’t news, but the chapter is given the space it needs to explore how this genre of films typically present women (hard working, uptight) and men (slackers, fun), and then how it shows these men consistently “scoring” with a woman who seems out of their reach and subverting her to their way of thinking.
Conversely, other chapters propose the idea that female characters can be just as guilty of misogynistic behaviour. Not least in the wash of wedding movies, such as Bride Wars, which was unanimously panned by critics upon release for being anti-feminist and aggressive towards its female characters, neither of whom were in any way likeable.
However, films geared at a younger female audience, such as The Sisterhood of the Traveling Pants, fare well as positive examples of a realistic portrayal of adolescence, early sex and friendship. As well as being an interesting example of how a short series of young adult novels has become a small film franchise, backed up by one of the earliest social media campaigns.
For more information about Feminism At The Movies, please visit Routledge’s website.
Posted by Jane at Sunday, February 12, 2012