Homeland - and the rise of female leads in TV dramas 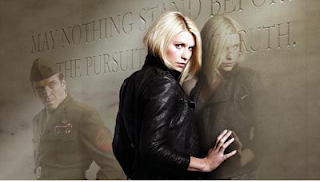 In recent years, TV viewers have enjoyed several crime dramas with strong female leads.
Borgen, The Killing, Prime Suspect, The Closer… OK, the list starts to run a little thin here. But I’m pleased to say we can now add Homeland to the countdown, which is starting its UK airing on February 19, over on Channel 4.
Following it’s initial season in the US, Homeland has scored two Golden Globe wins – including Best Actress in a TV Series for the female lead Claire Danes, who plays CIA agent Carrie Mathison. A second season has been promised for the autumn.
Loosely based on Gideon Raff's Israeli TV series Prisoners of War, it centres on an American soldier, Sgt Nicholas Brody, (Damian Lewis) taken prisoner during the invasion of Iraq in 2003. Left for dead, Brody miraculously returns to the US after years in captivity. CIA agent Carrie Mathison (Claire Danes) becomes convinced that the intelligence that led to his rescue was a set-up, and that this national hero may be connected to an Al-Qaeda plot to be carried out on American soil.
You can also throw in Carrie’s own psychological demons after her experiences working in Afghanistan, and the fact she is bipolar – a condition she keeps secret from her colleagues, fearing she would be thrown out of the CIA as unstable. What you end up with is an outwardly strong and successful female character, who is driven and respected, but who is inwardly struggling to keep her mind together.
But before you panic that this is another example of a female who is shown as weak due to illness of her lack of a relationship, please think again. I’m not going to give away any plot details, as (having just finished watching all 12 episodes) Homeland is full of many twists alongside the slow burning central narrative driver. But please take my word for it that this is another positive example of women being shown as good leaders. (Although, sure, if push comes to shove, we can find fault with some perceptions of Carrie’s character.)
As an aside, of the five shows I listed above, only one is UK-born (Prime Suspect). What does that tell us about the programming chiefs in our, excuse me, homeland TV stations? THAT is the big question.
TV Licensing statistics in the UK show that women generally watch more TV than men do, so surely it’s logical to put more women in strong, leading roles?
Yes, there are lots of fluffy, female-led shows like Gossip Girl, New Girl, 2 Broke Girls (can you spot a theme?)… but these programmes focus on women as ‘girls’ – as vulnerable, image-obsessed, fashion-focused, man-hunters whose main activities are designer shopping, obsessing over their relationship status, drinking cocktails with the ‘girls’ and coo-ing over a pair of expensive high heels, while waving a sparkle-encrusted Blackberry around. In short: vacuous. And really boring.
It’s a self-fulfilling prophecy – if you tell women this is how ‘real’ women are, then this may be what viewers aspire to. But TV programmers should credit female audiences with more intelligence and create more characters along the lines of Sarah Lund and Carrie Mathison – women who really are impressive, strong, intelligent role models. Women who succeed, without tottering around in high heels, faffing about with calorific mascara wands, and worrying about their weight. In short, REAL women.
In the meantime, tune in to Homeland and enjoy Claire Danes’ ability to get the job done.
Posted by Jane at Tuesday, February 07, 2012