'The Fortnight in September' - RC Sherriff

BOOK TWO - 'THE FORTNIGHT IN SEPTEMBER' by RC SHERRIFF 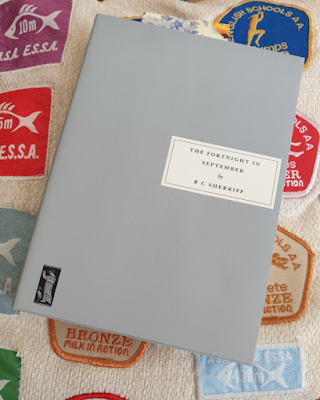 I'm breaking with tradition on this blog and writing about something that (whisper it) a man (gasp) has done. But he's done it ever so well, and he's disguised his name by using only his initials so we can pretend it was written by a woman and all will be well. (Removes tongue from cheek.)

The Fortnight in September by RC Sherriff (1896-1975) has been sitting on my to-be-read pile for about two years. Maybe longer. But it got rocketed to the top after author Lissa Evans (who is a delight on Twitter; you should also read her books - two of which I have written about here and here) posted her list of books for troubling times. And this was on there.

Published by Persephone Books (please do buy direct from them if you'd like a copy, as that's the best way to support an independent publisher), we know we're in safe hands from the off. Persephone don't often publish books by male writers so when they do, we know they must have done it for a good reason. And they certainly have. The preface to The Fortnight in September is by Sherriff himself and is an excerpt from his autobiography. He describes how his 1931 novel came to be. It was a huge departure from his previous work (including the successful WW1 play Journey's End that drew on his experiences in the trenches) and he initially wrote it only for his own amusement, unable to imagine how this simple story of a family going on their annual holiday to Bognor Regis could possibly be of interest to anyone else. How wrong he was!

The joy of The Fortnight in September lies in its detail, its mundanity, its close observations of the nuances of middle-Englanders who know their place but secretly harbour aspirations to be something more. The Stevens family consists of Mr and Mrs Stevens, son Dick (who is frustrated in an office job he felt pushed into), daughter Mary (who works for a dressmaker) and school-age Ernie. I absolutely love the fact that even though we know the first names of the parents, they are only ever referred to as Mr Stevens and Mrs Stevens. This detail perfectly sums up the time, place and atmosphere of our leading family.

Closely-knit, the Stevens' know they are on the cusp of change but they don't want to mention it. Dick and Mary are really getting a little too old for a seaside holiday with their parents and kid brother. The boarding house they go to (the same one every single year, for two decades) has become shabby and uncomfortable, but nobody wants to say anything less they spoil the magic. Most delightfully, Mrs Stevens doesn't even much enjoy the annual holiday (her favourite hour of each day is the one when everyone goes out and leaves her on her own with a glass of port) but keeps pretending that she does so as not to spoil it for anyone else. It's all just wonderful.

Nothing really happens. In exacting detail, we follow the family as they close up their London home, drop the canary off with an annoying neighbour and we go with them on their train journey to Bognor. We share in the magic of walking from the station to Seaview, their boarding house, and we go with them as they each quietly pretend not to notice how the house is that bit more rundown than it was last year, and the year before, and the year before that.

For the Stevens', the days are taken up with routine. Mrs Stevens goes to the shops, the children swim and play on the beach, Mr Stevens enjoys his evening drink in the pub and flirting with the barmaid. But we see the shadow of change looming on this evolving family. Dick is starting to go out on brooding walks on his own. Mary is befriended by a more outgoing girl than herself. And Mrs Stevens has a frank heart-to-heart with their landlady at Seaview.

But when the family head back to London, we know that while small changes might well take place for the Stevens family, ultimately they will continue in their gentle, kind and considerable manner. Looking out for one another, considering the feelings of others, and being good, honest people... albeit ones who have to draw straws to decide who has the bad luck of visiting the neighbour to deliver the canary.

I cannot recommend The Fortnight in September highly enough. Especially in these difficult times. I wished it would not end.

PS - Here's another blogger's list of suggested reading for taking the edge of pandemic angst. Lots of good suggestions on here.