During these strange times of isolation, social distancing and almost-lockdown in the face of the coronavirus pandemic, like many people I am seeking comfort in books. So whether anyone wants it or not, I will be writing here about the books I've been reading. 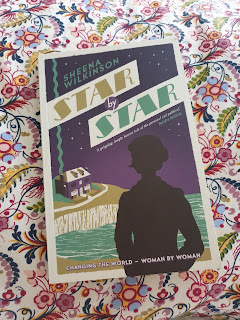 Book four in this Lockdown Literature series sees me return to familiar territory - suffrage novels. I've long had a fascination with novels about the suffrage era, and specifically young adult novels, because I believe it is so important to educate and interest the younger generation in this critical period. And this is where Star By Star by Sheena Wilkinson comes in.

Initially, this seems a bit of an odd choice to read during a global pandemic given that Star By Star is set in 1918 during the height of the Spanish Flu global pandemic. For instance, here is the back of the book: 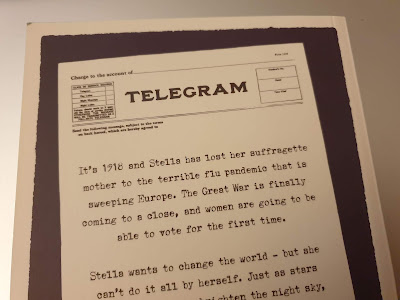 But bear with me. There is actually something rather comforting about reading about a past pandemic in the middle of the current one. We are reminded that this has happened before and we have survived it before. In fact, by virtue of the advances in medicine, technology and communication we have it more comfortable now. Although, of course, it is no less worrying.

Our hero Stella is just 15 and her mother has recently died after contracting the Spanish Flu. Left alone as an orphan in Manchester, Stella travels alone to Cuanbeg on the west coast of Ireland to stay with her aunt Nancy: her mother's sister, whom Stella has never previously met. Stella's mum, you see, had been a suffragette and her family had disowned her when she became pregnant as an unmarried 16-year-old, forcing her to flee to England and forge a new life with her daughter. Growing up with a militant mum, Stella is imbued with the suffrage spirit and is struggling to come to terms with her grief, her new life in a quiet rural town, the realities of the deadly flu raging all around, the seemingly never-ending war and her immense sadness that her mother will not be able to vote in the December 1918 elections - the very first one that some women could vote in.

I really liked that Star By Star repeatedly acknowledges that the 1918 result was only a partial victory for women. So many people now think that 1918 was the end of the suffrage battle but it was far from it - women could only vote if they met stringent criteria: being over 30, owning property, having a degree etc, meaning that many of the women who fought for the vote were still not able to vote until 1928, by which time many had died.

It was refreshing to read a suffrage novel that is a break from the norm. In Star By Star our focus is less on the suffrage campaign as it is on the aftermath of the survivors of that bitter war. Stella is a strong young woman and her character is shaped by her mother's spirit, but the issues of grief and isolation are what are covered here, coupled with Stella's fighting spirit to find good, her determination to make the world a better place and to help those that she can. And in these current times of grief and isolation, it strikes me that Star By Star would be a useful novel for many younger readers to turn to at the moment.