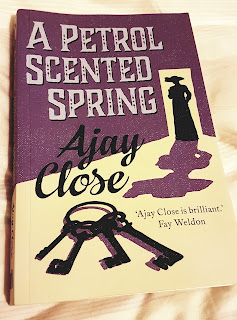 Wow! This book has been sitting on my To Be Read pile for well over a year. Thankfully, something made me finally pick it up to take on a succession of long train journeys at the weekend and I am now a) kicking myself for not having read it sooner and b) praising myself for picking such an absorbing and compelling and wonderful book to accompany me on my travels.

A Petrol Scented Spring by the Scottish author Ajay Close came to my attention via nothing more exotic than my periodic online search for novels about the suffrage movement. But this is far from your bog-standard suffrage novel; this is something quite, quite different.

Set in Perth, Scotland, we are offered a rare glimpse of suffrage life north of the border, which is a welcome change from the majority of novels that are London-centric. As such, the real-life characters who Ajay has used as the basis for many of her characters in the meticulously well-researched A Petrol Scented Spring are not ones I had previously known of, but have now becomes ones I want to know more about.

Centered around the suffocating and almost-mediaeval Perth Prison, we meet the reclusive and repressed prison doctor Hugh Ferguson Watson. A man in his early 40s who has been kissed only once as a teenager and who seems to have scant idea how to relate to actual humans, particularly female humans. Watson’s previous role was as the doctor in a mental asylum, where he learnt how to force feed patients who were not of sound mind. Now, he has been enlisted to the prison services to deal with hunger striking suffragettes and begin the barbaric process of force feeding these political prisoners.

Watson becomes obsessed with one suffragette in particular, Arabella Scott - a woman who his ‘love’ obliges him to torture in the most bizarre and disgusting means possible in order (in his mind) to keep her pure for himself. Arabella is a strong-willed woman with a sharp intellect, steadfast composure and unerring stubborness to endure multiple force feedings every single day… during the entire nine months of her incarceration. As if this brutal twice-daily assault was not enough (we read graphically about how Arabella regurgitates the egg mixture forced into her stomach by a greased tube, and how it comes out stained pink with blood and gritty with bits of broken teeth), Watson keeps Arabella in solitary confinement from the other prisoners, but with at least one wardress to sit in her cell and prevent her leaving her bed, sitting up or even turning to lie on her side - causing the most unimaginable pain in the prisoner’s motionless body. Yet somehow, Watson believes he is doing this because he loves Arabella and wants to keep her pure.

And then we meet the naive Donella; a well-brought up young lady who is staying in Perth with relatives to recuperate after an illness. By chance she meets Dr Watson, falls in love and the two quickly marry, despite the heavy suspicion of her sister Hilda. There’s something about Donella that appeals to the sexless Dr Watson: she looks identical to Arabella. But of course, she is not Arabella… and there the novel takes an even more cruel and horrible turn.

Honestly, A Petrol Scented Spring is the most gripping and compelling novel I’ve read for months. It quite genuinely is a page-turner. I usually find it very hard to read books on trains as all the noises and people and announcements distract me, but A Petrol Scented Spring managed to completely catch my attention and draw me in to its dark, stinking and brutal world. I even had to stay up reading it into the twilight hours when I got home to ensure I found out how it ended. Hint: you should do the same.


PS - As further proof of my newfound adoration of Ajay Close, please have a read of the ‘About Me’ page on her website. One day I hope to engineer a situation where we go out for drinks together, ‘cos she sounds like she would be a bloody good drinking companion.