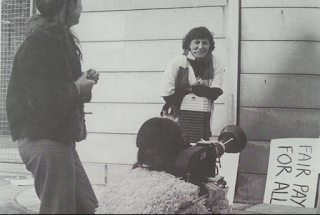 From out of the second wave Women’s Liberation movement in the 1970s and 1980s there came a powerful surge of feminist theatre and film groups. One such collective was the London Women’s Theatre Group, formed in 1972 when Midge MacKenzie placed an advert in a newspaper looking for women to join her in forming their own filmmaking collective. In a pre-punk spirit, they forged on regardless of whether or not they knew how and taught themselves the required skills as they went along.

The sixth film to come out of the London Women’s Theatre Group (LWTG) was The Amazing Equal Pay Show in 1974, which worked with the Women’s Street Theatre Group (WSTG) to turn some of their feminist street performance into cinematic film. The result is a chaotic, anarchic and “political burlesque” (according to the BFI) about women’s fight to be paid the same as men for doing the same work. Watching it in 2015, I am again reminded of the punk DIY spirit, even though the main UK punk heyday was still around the corner waiting to explode in 1976.

The LWTG filmmaking styles foreshadow the work of punk directors such as Derek Jarman and Julien Temple, particularly in the later’s 1980 film about The Sex Pistols: The Great Rock’n’Roll Swindle. Aside from both films being superficially concerned with money, they are both films led by a duo of chaos-creating grotesques.

In The Amazing Equal Pay Show, the Machiavellian and upside-down moustachioed male villain (played by a woman, of course) parades around as a top-hatted circus leader who manipulates the women into doing what he wishes in the interests of boosting his capitalist purse. And at his side is the grody Poodle - a dollybird puppet trussed up in stockings and suspenders, pink wig and with a mask covering her true features; a woman who is routinely reminded to dance and distract the masses from their misery. The age old trope of man pitting women against women and hoping for a fight.

Meanwhile The Great Rock’n’Roll Swindle has the Cockney pantomime villain of guitarist Steve Jones lording it around the UK in a Rolls Royce as he hunts down the unscrupulous Malcolm McLaren who is delivering his step-by-step guide to generating cash from chaos while on the run from the establishment… with dwarf Helen Wellington-Lloyd and punk matriarch Jordan bringing up the rear in bondage wear.

The overriding message of both films is "no future". For the Sex Pistols there was no future for the working-class youth, and for the London Women’s Theatre Group and Women’s Street Theatre Group there was no future in a capitalist society that was determined to keep women in the kitchen, dependent on men for every single penny. Neither film ends hopefully, but both show the underdogs kicking against the system and fighting for a voice.

The Amazing Equal Pay Show is clearly a consciousness-raising tool, drawing women’s attention to the gross financial inequalities they endured at the hands of men, but doing so in a carnival manner incorporating circus ringleaders, song, pantomime, drama and horror. With no clear narrative, and the cast swapping characters and genders, it’s not surprising to learn filmmaker Midge MacKenzie had spent time in the 1960s with the likes of Francois Truffaut and Jean Luc Goddard.

What stands throughout The Amazing Equal Pay Show is the LWTG’s burning desire to speak on behalf of all women and to give them the voice that patriarchy and capitalism denied them.

In an era where women couldn’t buy anything expensive without finding a man to stand as guarantor for them, an era with no social media and many homes still not even having a telephone, a voice was one of the many things that a lot of women were denied.


In 1975, Midge Mackenzie would go on to devise, develop, co-produce (and author the accompanying book to) the BBC’s groundbreaking TV drama Shoulder To Shoulder about the suffragette movement, which remains the only televised drama of this important time. While director Linda Dove would win awards for her feminist film-making in subsequent years.

This film event was part of the Bristol Radical Film Festival 2015.
Posted by Jane at Sunday, October 11, 2015