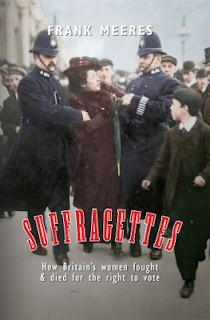 As the name of Frank Meeres’ new book Suffragettes (published by Amberley) suggests, he is focussing on the militant aspect of the votes for women campaign. And he does so very thoroughly.

Beginning with a short introduction to the lengthy suffrage campaign until the WSPU’s militancy began to dominate around 1907, Frank inevitably also includes a long-ish mention of Emily Wilding Davison’s death at the Epsom Derby in 1913.

However, the body of the book is a chronological guide through the main stages of the campaign between 1907 and 1914, when the First World War broke out and Emmeline Pankhurst suspended the campaign for women’s votes. Frank includes plenty of hefty quotes from newspapers and suffragette autobiographies, giving his volume weight and authority. (Although, I felt a little piqued that Christabel Pankhurst is incorrectly called ‘Charlotte’ in one instance towards the end – a typo that marred an otherwise factually clean book.)

There is also a substantial selection of images in the centre of Suffragettes, including one or two photos I hadn’t seen before – such as a photo of women sleeping in an unoccupied house to avoid the 1911 census, and one or two photos from the author’s collection of suffragette activity in his home area of Norfolk.

While Suffragettes may not add much to those already familiar with the campaign for the vote, it is a good starting place for those without much existing knowledge of the subject. And the photos in the middle are a bonus.
Posted by Jane at Sunday, June 02, 2013