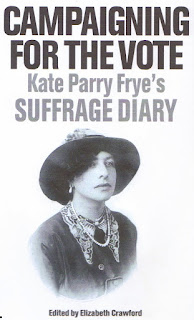 When editor Elizabeth Crawford was alerted to the discovery of a box of ancient diaries and memorabilia, she knew she was onto something extraordinarily special. In 2013, it is now so rare to come across forgotten treasure troves stuffed away in attics and cupboards – not least because we’ve all converted our attics into studio flats, and our cupboards into extra bedrooms. But what Elizabeth was shown was a complete set of a suffragist’s diaries throughout her entire life, in which the suffragist had painstakingly preserved flyers, photos, banners and other mementoes.

Shortly before Christmas I was lucky enough to go up to Parliament and hear Elizabeth talking about her new book – Campaigning For The Vote: Kate Parry Frye’s Suffrage Diary. She brought with her some of Kate’s diaries, and some of the (now very fragile) treasures that had been preserved within them. The talk was only an hour long, but it was the most engaging and fascinating session about the life of a woman nobody had ever previously heard of.

Kate Parry Frye was not a suffrage leader, she was not a militant, she never went to prison and she was never force-fed. But she was an extremely active member of the suffrage campaign from 1911 onwards, and toured all over the UK setting up meetings, organising speakers, campaigning, building awareness, knocking on doors and tirelessly raising people’s consciousness about how vitally important it was that women were entitled to equal political representation.

Kate was an avid diarist throughout her entire life (1878-1959), meaning that Elizabeth has worked hard to edit down Kate’s voluminous notebooks into this beautiful book that focuses on the suffrage era. Carefully introduced with a chapter by Elizabeth setting the scene and telling us about Kate’s upbringing, aspirations as an actress, extraordinarily long engagement to John and bringing us up to her life in 1911 when Kate launched herself head first into the suffrage campaign. Although the first suffrage entry Elizabeth finds in Kate’s diary was in March 1896 (when Kate would have been 18) when she attends a meeting with her mother where Millicent Fawcett is the guest speaker.

Kate Parry Frye’s Suffrage Diary is a deeply important book. Never before have we been able to see such a detailed, first-hand, day-to-day account of the suffrage campaign from someone who worked on the ground level, doing the un-thanked drudge work. The finished book is an absolute credit to Elizabeth and her publishers Francis Boutle – it is easily the most beautiful book in my suffrage library, and is wonderfully illustrated with scans of many of the letters, flyers and photos found in Kate’s collection, as well as containing side panels on each page explaining who the many extra characters Kate refers to are. The attention to detail in this book is exemplary, and so rewarding to read. What a treat.

For more information or to buy a copy, please visit the Francis Boutle website.

Elizabeth Crawford has a website that is the most comprehensive source of suffrage informationimaginable.

Please click here to read an article by Elizabeth about the book, illustrated with photos from the diaries.
Posted by Jane at Friday, May 31, 2013