Boy In A Dress 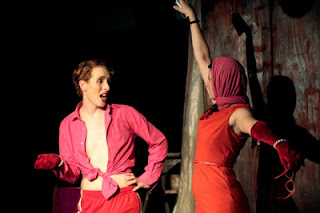 La JohnJoseph is a third-gendered, fallen Catholic, ex-fashion model. And this is her raw and exposed autobiographical story (currently being performed at Bristol Old Vic). Everything you’re about to watch is based on La JohnJoseph’s own life.

And what a life that’s been, despite her relatively young years (she was born in 1982). La JohnJoseph is the eldest of eight children, born to a Liverpudlian mother who’s had more husbands than Elizabeth Taylor, and who grew up in poverty, moving from house to house and school to school.

But arguably that’s not what made her childhood difficult. That had more to do with the fact everyone thought John Joseph (named after the Pope) was a girl. As she admits, as a child she believed that to be a girl was inferior to being a boy, but now she wears her third-gendered identity as a badge of honour.

The idea of gender identity is clearly the dominant theme in Boy In A Dress, and in addition to La JohnJoseph, the stage is also occupied by his female counterpart (Erin Siobhan Hutching) and a mannequin – all of which represent different parts of this third-gendered character. They’re supported by a keyboard player (Ed Jaspers), whose music weaves the story together.

Music plays a key role in Boy In A Dress, with La JohnJoseph performing reinterpretations of classics such as Sweet Child Of Mine (interspersed with the story of when his mum tried to have him taken into care), and All Apologies (interspersed with memories of his school truancy spent in public toilets).

Costume obviously also plays a big part, and La JohnJoseph and Erin share clothes, shoes and appearances seamlessly, as they merge into different parts of the same character. In addition, the centre of the stage is dominated by an enormous wardrobe over which the actors climb and dance, and through which they repeatedly emerge. Whether or not this is a nod to the wardrobe in Mr Ben (“as if by magic…”), the wardrobe in Narnia (which leads to another world), or an unsubtle reference to coming out of the closet… it doesn’t really matter. The wardrobe becomes its own character; it’s drawn on, graffitied, abused and repeatedly recreated right in front of our eyes.

La JohnJoseph is like the child Marc Almond and Lulu never had, and her show also starkly reveals a great deal about La JohnJoseph’s difficult relationship with her real mother. It would be interesting to know if she’s seen the show, and how she feels about it.

As a show about the way society views gender, and the rigidity with which most people see the sexes, Boy In A Dress works brilliantly. La JohnJoseph is a very likeable and fascinating character, she doesn’t invite sympathy or remorse, instead she shares and informs.

Boy In A Dress is performed in Bristol Old Vic’s Studio until March 2. Click here for more information.
Posted by Jane at Friday, March 01, 2013