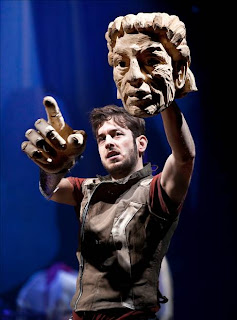 This is the kind of thing the Bristol Old Vic excels at. The contemporary retelling of a Shakespearean play that combines traditional theatre with modern manners in a seamless way.

But in this latest incarnation, puppets are not simply wooden marionettes or creatures operated by string… here they take on a new life, and in turn imbue new life in seemingly inanimate objects. In this case, planks of wood. Whenever a cast member isn’t primarily involved in a scene, they pick up a plank and animate it so that it becomes a fairy in a woodland scene, a musical instrument, the moving wind, and any number of other elements. For me, the music from the planks was particularly impressive.

I’m a recent convert to puppets after having seen Kneehigh’s A Very Old Man With Enormous Wings in Bristol Old Vic’s Studio last month. (A VERY recent convert, you’ll agree!). And the use of puppets between these two plays couldn’t be more contrasting.

While Kneehigh’s use was fairly traditional, in A Midsummer Night’s Dream the puppets encompass all manner of objects – whether these are the planks mentioned above, or beautiful Grecian masks, or the naughty Puck created from an oilcan, basket and saw (manipulated by three actors simultaneously). As these are interspersed with a healthy dose of human acting, the combined effect is one that keeps the audience on their toes. The wealth of imagination in Morris’ production is staggering, but at times it gets a little overwhelming.

There is some fine human acting in A Midsummer Night’s Dream, too – most notably from Akiya Henry as Hermia, who is the funniest and most endearing character in this entire production. Another highlight is Miltos Yerolemou’s Bottom… which combines puppetry and human acting to create a donkey that quite clearly steals the show. I’m loathe to say too much in case I spoil it for anyone, but all I can say is that when you see Bottom, you will know exactly what I mean.

But for me, the ultimate highlight is the very finale of A Midsummer Night’s Dream, when the giant puppets of Titania and Oberon come to life and dominate the whole stage – and this is a set that makes full use of the revitalised Old Vic’s deep, deep stage. Actors Saskia Portway and David Ricardo Pearce are both excellent in these roles.

A Midsummer Night’s Dream is performed at Bristol Old Vic until May 4. Click here for furtherinformation and to book tickets.
Posted by Jane at Monday, March 11, 2013