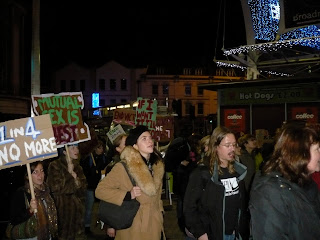 “On 18 November, we ask you to march with us in solidarity.
We ask you to join us in the fight to end violence against women and girls.”
Bristol Feminist Network
Last night, was the annual Reclaim The Night march in Bristol. And it was a fantastically liberating and empowering experience.
In Bristol, the march is organised by a team of volunteers from the Bristol Feminist Network (BFN). For those that don’t know about Reclaim The Night, I’ve copied a brief explanation of  the march direct from BFN’s website: “Reclaim the Night is an international movement against sexual violence. In Bristol, supporters organise vigils to remember those affected by sexual violence, and march to demonstrate our right to walk the streets at night.”
The most recent statistics show there are an average of 130 rapes every month in Bristol (collating figures between those bravely reported to police, and those unreported for a number of understandable reasons). Sian (a co-founder of BFN) explains how these figures are calculated here, and concludes: “When we know that we have 19 reported rapes per month in Bristol, but that only represents 15% of rapes overall, we can estimate that each month in Bristol there are 127 rapes.” It’s chilling stuff, and I recommend you read her post to get the bigger picture about this.


Sian told me yesterday: "I am just one woman from a larger group who have dedicated lots of time and energy over the past 3.5 years to make Reclaim The Night happen each year. Together, we have worked to create a successful and influential event that is part of BFN's wider work on breaking the silence on violence against women and girls in all its forms. I am proud to be part of this group of driven and determined women who are dedicated to ending violence against women and girls."


The first Reclaim The Night marches were in 1977, and they fast became a feature in cities all over the world. Yet by the mid-1990s the marches had died out, until they were revived by Finn Mackay in 2004, the same year that she set up London Feminist Network. The first revived march had just 50 women, says Finn, but now around 3,000 women march in London every year.

Finn told me this today: "Revolutionary feminists in Leeds first started Reclaim the Night marches in the UK in November 1977, calling for women to organise synchronised marches on the same night in towns and cities across the country. Up to 400 women, carrying flaming torches, converged on their city centres and took back streets and parks and areas where women were told not to go. At that time women were appalled at police advice to stay indoors to stay safe - where women are actually most at risk of male violence - and at the fact that only one in three reported rapes ended in a conviction.

"Today that figure is one in 20. We don't believe that 19 out of every 20 women who report rape are liars, we demand justice for survivors, safe streets for women, protected specialist services for survivors and an end to all forms of male violence against women."


In light of the facts that the vast majority of rapes go unreported, and the fact that street harassment is still such an enormous issue, as well as a huge number of other factors, the worldwide Reclaim The Night marches remain vital dates on the feminist calendar. Both for women to meet like-minded people and proudly march through their city’s streets, and to reinforce the point to society that women deserve to be treated with respect – and that nobody is EVER asking to be raped or abused. Ever. Whether on the street, at home, anywhere.
In Bristol, this is all sadly extra poignant for us. When Joanna Yeates was murdered in our city last Christmas, the police wheeled out the same public advice that they have done for decades: women should stay home, women should not go out alone after dark (which can mean as early as 4.30pm in winter), and women must take responsibility for not being attacked. There is rarely mention of the attackers taking responsibility for not attacking. To their credit, police in Bristol later altered their advice and encouraged women to carry on with their lives. However, we need to lessen the need for this kind of bulletin in the first place, which is where the Reclaim The Night marches play a pivotal role.
Starting with a moving candlelit vigil on College Green, outside the Bristol City Council houses (ironically, the location where some many bad licencing decisions are made - for lap dance clubs, Hooters etc), we remember the victims of violence. The sight of so many candles flickering in lanterns and makeshift jam jar lanterns is both beautiful and touching, and a fitting start to the march through the city centre. With hundreds and hundreds of people marching (the front of the march is for self-identifying women, but anyone is welcome to join the main section), it’s a truly powerful feeling and sight to take back the streets of our city. 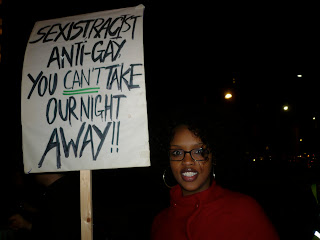 The march concluded with a rally in the central gardens of the Georgian architecture that makes up Portland Square, near the St Paul’s district. Speakers included Sian Norris and Anna Brown (BFN), Dr Helen Mott (Bristol Fawcett), Nimco Ali - above (Daughters of Eve), Lesley Welch (Bristol Domestic Abuse Forum), Susan Lawrence (Bristol Rape Crisis), Jess Dicken (NHS 4YP) and Chitra Nagajararan (No Women No Peace). The whole evening was especially significant when Lesley shared the awful news that a woman had been found murdered in the St George's area of Bristol only three days ago.
BFN states: “The aims of Reclaim the Night are to educate about consent and violence against women. To educate and eradicate the myths that surround rape, to eradicate the belief that women are to blame if their drunk or have a history with the attacker, to educate and eradicate the belief that men can’t stop once they’ve started, to educate and eradicate the belief that only stranger rape is real rape. To educate about respect and consent in relationships. To educate and empower men and women about their sexuality and relationships.”

Bristol’s Reclaim The Night march is in support of Bristol Rape Crisis, the Sexual Assault Referral Centre (SARC), One25 (helping women trapped in street sex work), and other vital Bristol services (whose funding is constantly at risk) supporting women who have suffered rape, violence or any form of abuse.
Finn adds: "If you are in London on Saturday, 26 November, then put your feet on the streets for women and help us shut down central London to say NO to male violence against women and NO cuts to women's services. Be there, be one of many, be a movement - reclaim your night and win the day."
Take back the streets - Reclaim the night!
Posted by Jane at Saturday, November 19, 2011