How To Fill a Black Hole – Book Review & Giveaway! 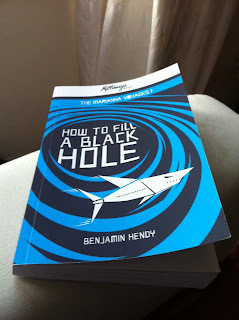 Filling the gap in the market for a serial about children marooned in space, along comes Benjamin Hendy’s debut novel How To Fill A Black Hole (Milliways Books, £7.99 – £1 from each goes to Southampton Hospital Charity). It’s the first in The Marianna Voyages series, with the second instalment out next year.
The book opens in the year 2412, at which point Earth has been uninhabitable for 150 years and humans have been relocated to a colossal spaceship coursing into the unknown. We meet heroes Connor, Grace, Evelyn, Adam and Max just before disaster befalls their parents (and most other inhabitants of the ship they called home), and the five youngsters (aged eight to 15) begin an adventure through space to safety.
Crudely described (by me!) as a cross between Lord of the Flies and Red Dwarf, How To Fill A Black Hole takes the characters on a journey that sees them fighting giant venomous spiders and four-winged vultures, as well as meeting a few more friendly characters who offer a glimpse of hope in their desolate environment. And while the impetus for the novel is clearly the kids’ adventure, I was curious to read it from the perspective of how they handle their grief, isolation and possible futility. As yet, these issues have not been thoroughly explored but then this is only the first book in the series. I was also desperate to know how thorny issue of puberty was going to affect the characters. (Meg Rosoff’s award-winning How I Live Now is a great example of a young adult’s novel tackling life, grief and growing-up without adult supervision.)
How To Fill A Black Hole is surprisingly gripping for a debut novel, and there are plenty of cliff hangers and dark twists to keep you engaged. Being a first book, there’s a few teething problems that will doubtless get ironed out as Hendy develops the series: in places the dialogue is a little clunky and I wondered why – in 2412 – the characters were listening to Abba and Dusty Springfield. But that’s me being picky.
My main concern was that I didn’t feel the children’s grief was dealt with convincingly, except for perhaps the youngest character Max. Although I appreciate it’s tough to make grief into a page-turner, it’s also a topic that many younger readers will unfortunately have to face. A go-to novel handling the topic sensitively would be a bonus on any library shelf.
However, there were enough dramas, surprises and even a budding romance to keep readers hopeful that the second book in the series, The Revolutionary Kind, will be a nice little plot developer. It’s well worth giving How To Fill A Black Hole a punt and watching the series develop.
FREE BOOKS!
Milliways Books has kindly offered three copies of How To Fill A Black Hole for a pre-Christmas giveaway. Simply email your name and address to competitions@milliwaysbooks.com, putting ‘MadamJ-Mo’ in the subject line. The first three names picked on December 9 will be sent their book – hopefully in time for Christmas! You can also download the first three chapters for free here.
Posted by Jane at Sunday, November 27, 2011