Recently, I’ve been reminded about how awesome the suffragettes were and just how many things we have to thank them for. It started after I stumbled across this incredible WSPU pin badge from the 1910s in Bristol City Museum, which I took a photo of and keep returning to and studying. 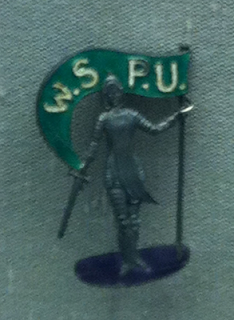 I look at this badge and find myself wondering who the woman was who owned it: what her story was, what her role in the fight was, did she go to prison, was she force fed, what did her family think, and – more than anything – that I hoped she lived long enough to see women achieve the vote, thanks to her and her sisters.

I want to know how this badge ended up in the Bristol City Museum: the signage by the case indicates it was donated as part of a large collection of costume jewellery from someone in Oxford. But how did it come into their ownership, and by what means did it leave the suffragette’s hands, or her family’s? Were her family not proud of her amazing fight, so tossed it out with the rubbish? Maybe the badge was absent-mindedly lost and later mourned by the suffragette's ancestors. Perhaps nobody appreciated the socio-historical value of it.
The badge is a wee thing – about 3cm high and 1.5cm wide. But among a museum of countless mind-blowing artefacts, this is the one thing that is guaranteed to receive my attention every time I visit (which is regularly).
But the badge isn’t the only suffragette symbol to return in recent weeks. At the UK Feminista Summer School last month, I was delighted that environmental activist Tamsin Omond stood up before her talk and bedecked herself in a glorious ‘Deeds Not Words' sash, echoing the slogan of our fore-sisters. A little digging around tells me Tamsin models the action of her activist group Climate Rush on the suffragettes. I’m going to find out more about her, and hopefully contact her to ask about her loyalty to the suffragettes.
Back in March, a few of us Bristol feminists joined the audience for the suffragette-set play Her Naked Skin, performed by drama students at the University of Bristol. It was excellent. And my friends and I earned ourselves some sideways glances from other audience members for cheering and clapping loudly at appropriate points in the story (and boo-ing at a few, too)! You may be interested to know that Her Naked Skin was written in 2008 by Rebecca Lenkiewciz  and was the first play by a female writer to be produced on the main stage at the Royal National Theatre, London (opened 1963). A 45-year wait. But why?
And with all this going on, and having had a fairly stressful few months lately, the combination of Nat’s tweet, finding this incredible badge, applauding Tamsin for her sash, plus some general reading around the suffragettes to learn more about them (having admired American Djuna Barnes’ support for the UK suffragettes so much that it took up much of my first MA thesis), the spirit and legacy of the suffragettes has kept my head above water. 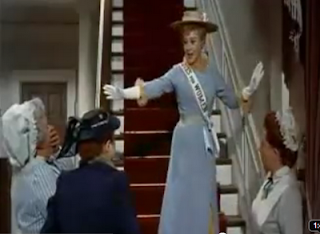 And in the background to all of this, stuck in my head, is the rousing call of Mrs Banks to her Sister Suffragettes in the 1964 film Mary Poppins (dir: Robert Stevenson), set in London, 1910. I’ll assume you know the film, which has been one of my favourites since I was about six and I used to watch the video on rotation, mesmerised by it, although at six, I knew nothing of suffrage or voting. But I remember the most interesting school history lesson ever was when I was about 12, and the suffragettes got a mention in one solitary class. For once, I was fired up by a teacher to know more about these outstanding women. But I remember going to the school library and looking for a book about suffragettes… it was not there. The suffragettes popped up again in an English literature class, for which maddeningly I can’t remember the book’s name or author, but it led to some exercises involving writing letters and diary entries as if we were the imprisoned suffragettes we were reading about. More chillingly, it involved imaging you’d been forced fed and writing about how that felt.
At the time, I wanted to bring in my Mary Poppins video and play Mrs Banks’ song to the class. I wasn’t allowed, but now into adulthood that hasn’t stopped me playing 'Sister Suffragette' in regular bursts from the soundtrack CD, and watching the film in times of low spirits.  The lyrics are mostly bang on (bar the line about men being “rather stupid”), and are well worth repeating. I print them in full here for your reading/singing pleasure. Deeds not words. Stand up, sister suffragettes. Solidarity to all, and particularly those who have been exceptionally kind during my recent struggles.
We're clearly soldiers in petticoats
And dauntless crusaders for woman's votes
Though we adore men individually
We agree that as a group they're rather stupid!

Cast off the shackles of yesterday!
Shoulder to shoulder into the fray!
Our daughters' daughters will adore us
And they'll sign in grateful chorus
"Well done, Sister Suffragette!"

From Kensington to Billingsgate
One hears the restless cries!
From ev'ry corner of the land:
"Womankind, arise!"
Political equality and equal rights with men!
Take heart! For Missus Pankhurst has been clapped in irons again!

No more the meek and mild subservients we!
We're fighting for our rights, militantly!
Never you fear!

So, cast off the shackles of yesterday!
Shoulder to shoulder into the fray!
Our daughters' daughters will adore us
And they'll sign in grateful chorus
"Well done! Well done!
Well done Sister Suffragette!
Posted by Jane at Wednesday, September 21, 2011