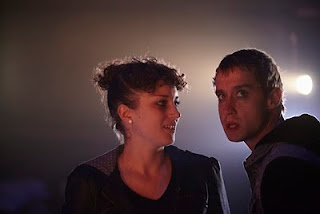 It’s a brave production that seats some of its audience on the floor. Especially when some of those people are press. But Coasting (directed by Emily Watson-Howe, from a script by Natalie McGrath) makes this decision, as part of the experimental spirit imbued through the script. Whether this is to reinforce the claustrophobia of the characters, and/or to strengthen our solidarity with the uncomfortable existence of those souls… who can say? Maybe it’s merely a quirk designed to make you view this as an avant-garde theatrical experiment? I’m only guessing.
In the heavily misted Studio, we wait and then watch as druggy clubby ‘80s urchins Pearl (Nadia Giscir) and Ocean (Tom Wainwright) ricochet and screech from one side of the room to the other. Their rapid speech is littered with bizarre patois, and the characters refer to themselves in the third person, which is strange, but after a while you think perhaps this is a device to underscore their closeness. Regardless, for the first few minutes I hadn’t got a clue what they said!
Coasting watches Peal and Ocean in their impoverished existence in a nameless seaside town on Bonfire Night. There’s a threat in the air and the looming presence of an otherness… quickly identified as “lily law”, aka lonely policewoman Falcon (Helena Lymbery).
The issue of burgeoning sexuality in an unforgiving and hateful world is as topical now as it was in the late ‘80s, the era in which Coasting is set according to the programme. However, this is at odds with the early ‘80s pop played while we waited for the play to start. Aside from being years out, it seemed doubtful that characters living on the fringes of society would spend their time listening to early Human League or OMD. That’s not a tricky detail to get right and, as with anything, it’s the details that make something a success… or not.
Wainwright is passable as a disheveled angry gay man, but Giscir carries the show with her strong performance, her believable emotion and her growing terror. However, Lymbery seems ill at ease alongside these two. Her performance, in a deliberately contrived script, jars with those of Wainwright and Giscir, who have a spark and have clearly rehearsed and rehearsed their lines, generating genuine chemistry.
Coasting is an interesting experiment in playful language, imaginative use of the theatre space, and casting of homegrown talent, but there’s still a long way to go. If you take risks and try something new, you have to work twice as hard to ensure it pays off, and I don’t believe this is there yet. That’s not to say there’s not talent on display: Giscir is clearly a gifted actress, and McGrath’s script shows great potential. But as it stands, I didn’t feel carried along by the sway of Coasting or invested in the characters… meaning that the end came as something of a relief.
-
Coasting is presented as part of Bristol Ferment, which is a year-round programme for the community of theatre-makers from Bristol and the South West.

Coasting is being performed until 15 October. For more information, visit the Coasting microsite. And to book tickets, please visit the Bristol Old Vic website.
Posted by Jane at Tuesday, September 27, 2011