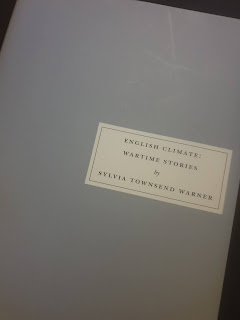 I expect a lot of people are in the same boat here but I have found it very difficult to read in 2020 - as the sparse content on this blog this year will confirm. In such an unsettled and anxious time, it has been hard to concentrate on novels, no matter how much I would love the escapism. But short stories have provided a good solution, and fortunately this collection by British writer Sylvia Townsend Warner hits the mark.

Published by Persephone Books (believe it or not, I do sometimes read books by other publishers), English Climate: Wartime Stories is, as you would imagine, a collection of short stories inspired by Sylvia’s experience of World War Two while living in the British countryside. We see vignettes of villagers who could populate any rural area all over the UK, and we have to wonder - a la DE Stevenson’s wonderful character Miss Buncle, also reprinted by Persephone - how many of these people were inspired by those whom Sylvia knew personally. They are not always flattering portrayals…

‘My Shirt is in Mexico’ is a mere four-and-a-half pages but neatly tells the story of two people who meet on a train and encourages the reader to be thankful for small things. ‘Noah’s Ark’ is about evacuated city children staying in the country, and their hosts’ difficulty in relating to these perceived wild creatures. While ‘Mutton’s Only House’ is such an extraordinary story about the preconceptions we make about people who we don’t really know that I had to read it twice, straight after each other.

Sylvia writes in a typically Persephone manner (if such a thing exists), in that she has a crisp but friendly tone, slightly admonishing those who judge others negatively, and with a sharp ability not to waste words on unnecessary sentences - which is a great skill in any writer. And at this time when we are all feeling mentally fragmented and emotionally spent, some comforting short stories from a simpler time are just what we need as we brace ourselves to go into a second year of pandemic mayhem, this time with the added nightmare of Brexit.