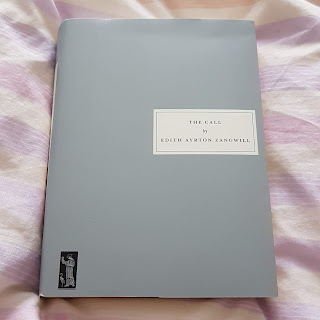 Things that are thrown out of windows during the narrative of The Call include (but are not limited to) prison food, Bovril, inedible rock cakes and copies of The Vote magazine. Given the force with which Edith Ayrton Zangwill’s excellent 1924 novel rattles through its nine-year period, it is no surprising that the undesirable elements are discarded. Though, I should add, the hurled copy of The Vote is swiftly replaced following a fresh purchase of the magazine by the determined would-be reader.

In 2018, it is of course only right that a publisher of forgotten books by women authors should publish a book about the suffrage movement, and in The Call Persephone Books has chosen a mighty volume. It’s long, it’s sprawling and it calls on a catalogue of wondrous elements. It’s fair to say it’s one of my favourite ever Persephone Books (and I’ve read about two thirds of their 130 to date).

Our shero Ursula is deemed the eccentric daughter of a social butterfly in a well-to-do London home. She hides away in her laboratory upstairs in the servants’ quarters, conducting endless experiments into gases. Her charming mother frankly despairs of her daughter ever settling down and living a ‘normal’ life, but her mother’s love and fondness for her daughter also shines through - especially given her crusty old step-father’s pig headedness.

Filling her time with laboratory work and being the lone woman at science meetings, Ursula has few friends apart from the older (and married) Professor Smee, who is besotted with her but whose ardour she does not even notice. But the more her scientific experiments get noticed by the academy, the more Ursula’s star rises and even when she meets the dashing Tony Balestier with whom she falls in love, her devotion to her science cannot be dampened. That is… until she falls in with the militant suffragettes.

Swinging from being a strident opposer to the women’s movement to a committed leader, Ursula is soon prioritising votes for women over everything else. Including Tony…

I will give no more away about the narrative of The Call, except to say that the call of the title can be interpreted in a number of ways: Ursula’s scientific work, her devotion to women’s suffrage, her commitment to Tony, her objection to the violence of war, or her determination to invent a means of extinguishing the ‘liquid fire’ that the Germans are using during the war.

This is a thoroughly compelling book, starting in 1909 and enduring until 1918. Edith writes in an accessible and enjoyable way, and even the potentially tedious ‘science parts’ are not alienating to a non-science type such as me (Edith’s own step-mother was the scientist Hertha Marks Ayrton, which should explain her insight into the subject). The descriptions of suffrage life are hectic and consuming, as that life no doubt was - my only minor grumble is that Ursula moves into this life so quickly and exits it equally fast. But the sections about her prison experiences, especially the vivid and scalding descriptions of being on hunger and thirst strikes, are painfully shocking and well worth reading: all too often, contemporary onlookers do not seem to grasp the physical and mental agony of days and weeks on a hunger and thirst strike and how crippling this is to the person… and that is before even considering the torture of forcible feeding. Along with the description of the same experiences in Sylvia Pankhurst’s own writings, Ursula’s experiences in The Call are truly shocking. As they should be.

Re-publishing The Call is a credit to Persephone and this is exactly the kind of book that I hope they continue putting out. Suffrage novels written at the time are hard to come by (though I’ve recently read both Restored by Emily Spender and Mildred’s Career by Miss Ramsay, both of which were written in the 1870s about the pre-militant campaign, and Mildred’s Career in particular is perfect for a Persephone reprint - hint hint! You can read my review of it on the hyperlink).

On a personal note, completing The Call feels like a triumph. Following a bereavement seven weeks ago that left me devastated, my ability to read anything beyond a few lines here and there in a trashy magazine has been hopeless. Knowing what hot-water-bottle tomes Persephone Books can be, I was determined to push on with The Call. Everything about it seemed like it should be a tonic to me: woman writer, suffrage theme, defiance of social mores, page-turning plot. But with my mind in pieces and my concentration shot, I struggled. But I’m glad I pushed on, because the story has been totally engrossing and completing it has been a huge satisfaction. Onwards women writers.
Posted by Jane at Monday, December 24, 2018