'Windrush: Movement of the People' 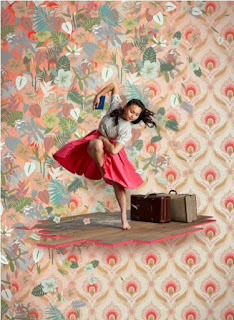 What a mesmerising, captivating and completely absorbing performance Windrush: Movement of the People is. I was lucky enough to catch it at Bristol Old Vic, where it is only on for two nights at the start of a tour to various venues around the UK (check the link at the end of this post for more information).

Created by the impressive Phoenix Dance Theatre, Windrush celebrates and illuminates the promises, reality and hope during this 70th anniversary year of the arrival of the SS Empire Windrush, which brought the first Caribbean migrants to the UK. The boat brought 492 people (known as the Windrush generation) from the Caribbean to the UK in 1948 in a moment that marked the start of the post war immigration boom that led to a radical shift in British society.

The soundtrack by Christella Litras is evocative and effective, spinning between calypso, jazz, gospel, reggae and more, and completely brings to life the changes occuring in those crucial decades of Britain’s formative multicultural era. The refrain of “You called and we came” from a poem read aloud is particularly haunting, as the newly arrived immigrants are shunned and excluded from a hostile British society.

Choreographer (and Phoenix Dance Company artistic director) Sharon Watson creates an extraordinary story that introduces us to our protagonists who are full of hope at what a move to the UK might mean (the sunny orange lighting supporting this), and then the awful reality of racism and bigotry that they encounter once here (portrayed by eerie faceless dancers in masks who wonderfully conjure up a sense of fear and ignorance, and backed up by dark and sombre lighting), followed by the sense of community and camaraderie that is fostered as a result (matched by the warmth of interior lighting). The duet between a reunited couple (Vanessa Vince-Pang, pictured above, and Prentice Whitlow), who had been parted for months, is especially beautiful to watch.

Windrush: Movement of the People is utterly mesmerising and I was gasping when the performance ended. I wanted to watch more and I want to watch it again. Don’t miss this!