'Mollie on the March'

'Mollie on The March' by Anna Carey 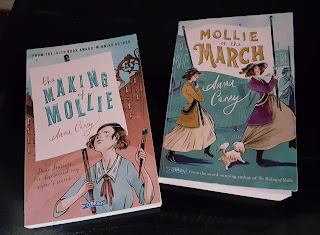 Hurrah, Mollie Carberry is back! You may recall that last November I wrote on the first instalment from YA writer Anna Carey about the schoolgirl suffragette in Dublin. The good news then was that Anna was close to finishing the second book in the series, and the better news is that now that book - Mollie on the March - is published.

Picking up where The Making of Mollie left off, Anna reunites us with our teenage shero who is still fired up from secretly painting a postbox with suffrage slogans alongside her best friend Nora. This time, Mollie and Nora are keen to be even more militant in their actions and to join Mollie's big sister Phyllis and her suffragette friends on marches and demonstrations when Prime Minister Asquith makes his visit to Dublin. Except, in the new book, Mollie and her crew get into far bigger and more daring but exciting scrapes.

Adding a fly to the ointment is Nora's wretched goody-two-shoes cousin Grace, who we met in the first book as a nuisance at school. This time, Grace has come to stay with Nora for the summer... and Nora and Mollie are determined not to let Grace find out about their suffrage plans for fear she will stop them taking action. Although there's a new side to Grace that readers may not be expecting...

As before, Anna uses real historical events as the basis for her storytelling, as well as peppering a few real-life characters into the background. And as before, the overall effect is one of magically capturing the moment and enveloping her reader in the scene.

I hope we see more books about Mollie and Nora in the future. Bravo, Anna!