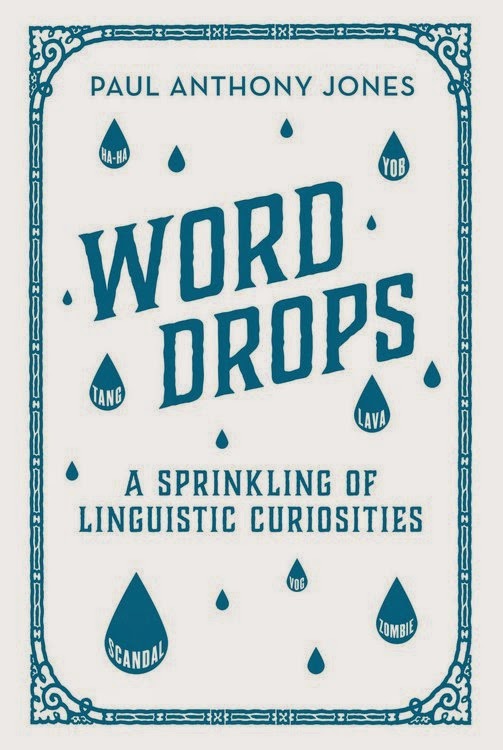 For the bookish, the wordists, the nerdists, the swots... Paul Anthony Jones has compiled you the most absorbing and fascinating dip-in tome you will find all year.

In his anthology Word Drops: A Sprinkling Of Linguistic Curiosities, Jones has taken his popular blog Haggard Hawks to the logical next level and curated a compelling collection of etymological treats for word geeks. This is Jones' third book, and since his previous two are also on the same theme (their sub-titles are The Story of English in Ten Phrases and Expressions, and The Origins of English in Ten Words) it seems he's found his niche in life.

Word Drops is very much a book to dip in and out of. It's a series of endless (but linked) words, coupled to their origins, meanings and a quantity of footnotes so great that they would put even David Foster Wallace to shame.

Some of the discoveries are simple and quaint: grandfather clocks take their name from a Victorian song called My Grandfather's Clock, while St Lucia is the only country named after a woman - really? How depressing! Perhaps St Lucia would be the only 'adamless' country - meaning a place inhabited entirely by women. One can but hope.

Other entries are more educational: as a runner, I am unsurprised to learn that the first treadmill was a man-powered mill for crushing rocks that was used as hard labour punishment for those in Victorian prisons. But I was fascinated to see that 'foul-mouthed' was yet another of the phrases coined by William Shakespeare that has endured into modern everyday speak (see also ' a foregone conclusion', 'in my mind's eye', 'the truth will out' and literally hundreds of others).

However, my favourite entry in Word Drops is surely this one:

The Hindi equivalent of 'it's no use crying over spilt milk' - ab pachhtaaye hote kya, jab chidia chug gayi khet? - means 'what's the point of crying when the birds ate the whole farm?'

Because there's no point arguing with it.

Word Drops is a nerdist's paradise. An intricately researched and elegantly put together collection of wordy nuggets. I challenge you to flick through the book, open it at any page and not find something worth sharing with someone else.