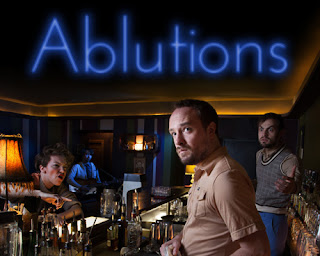 Based on Canadian author Patrick deWitt’s highly regarded 2009 novel, Ablutions is the sorry tale of an unnamed Los Angeles bartender (played by Eoin Slattery) who spends his shifts drinking himself into oblivion, and swallowing pills to “take the edge off”. Everything in his world is crumbling apart – his wife is leaving him, his bar manager is a coke-addicted thief, and he himself is a helpless alcoholic.

But while Ablutions is an important piece about the tragic consequences of alcoholism and how it rips so many lives apart, it’s clear that the stars of this show are not Eoin Slattery, but his supporting cast of Fiona Mikel and Harry Humberstone.

Slattery’s self-pitying, self-destructive, cynical barman is a pretty unlikeable soul who ends up as little more than a narrator for the show-stealing character pieces from Mikel and Humberstone. Ben Osborn provides acoustic musical accompaniment throughout the whole show, which adds another level of depth to Slattery’s barman.

Mikel in particular is the runaway star of this production. As the lone female in the cast, she is called on to play everything from the drunken barman’s long-suffering nurse wife, to the Sybil Fawlty-esque wife of the bar manager, and even a drunken lush giving a blow job in a bar toilet. She effortlessly flits between these characters, and brings real emotion and depth to Ablutions.

While Humberstone’s wiry form is perfect for providing the comic relief we desperately need in a story as sorry as this. Whether he’s doing hilarious hipster dance moves as an ex-model-turned-bar-manager, or playing a snide desert bartender, Humberstone uses his body for great comic effect. And nowhere better than in the absolutely genius scene where Slattery goes to a health food shop and Humberstone morphs into a simpering, weasely, slithery sales assistant who almost wraps himself around Slattery.

Aside from being a great example of how sad a disease alcoholism is, what Ablutions also confirms is how women are always the ones who drive the narrative – even if relegated to supporting roles. In Ablutions, Mikel’s many characters are the ones who care for our self-indulgent bartender… they’re his wife, his nurse, his boss, the ones he rips off, the ones he uses for sex… But despite these less than appreciated roles, Mikel remains the stand out star of this piece.

Ablutions will be at Bristol Old Vic until April 18, after which it tours the UK. Click here to book tickets to see it at the Old Vic, and here to see where else the show is being performed.
Posted by Jane at Wednesday, April 17, 2013