'Gossip from the Forest' by Sara Maitland 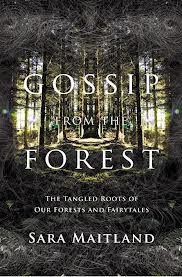 Just as Iain Sinclair's travelogue London Orbital mapped every inch of the M25 in beautifully lyrical detail, so Sara Maitland's Gossip From The Forest (Granta) leaves no leafy corner of British forestry undisturbed. And just as Sinclair’s book showed that the green and pleasant lands in England’s folklore are now nothing but ashphalted memories, Maitland pours dappled sunlight on the surviving areas of British woodland… well, those that haven’t become housing estates.

With inescapable ethereal overtones, Gossip From The Forest ensures the folklore we've garnered from the woodlands is tightly preserved for another generation. And it's a worthwhile project because, as Maitland notes, the fairytales we learned as children were bastardised repeatedly from inception. So much so that many bear little relation to their original tone or intent, often because the marketed audience shifted from adult peasants seeking distraction, to privileged children in city nurseries being told moralistic tales. You know, the sort of tales where the princess always has golden hair, animals are always anthropomorthic, and where avarice always meets a grisly end. Maitland reminds us it wasn't meant to be this way. But just as folk music has seen songs evolve through the travelling generations, forestry folk stories have been edited and tweaked. And both are equally in danger of being forgotten now that British lifestyles have changed and the habit of storytelling is dying out.

Gossip From The Forest is about much more than fairytales, though. This book is also a fascinating and unlikely sociohistorical commentary on how we have changed as Britons over the centuries. How we live, how we learn and how we treat one another. Not to mention some considered thoughts on etymology, society, politics and child rearing. Maitland leaves no tussock unturned!

In many ways, Maitland’s book reminds me of key messages from Nicola Bown’s Fairies in Nineteenth Century Literature, which again places Britain’s forests and nature at its core to explore the particular obsession of the Victorians with fairytales… the very generation whom Maitland credits with making the stories as moralistic as we now know them, and for most adjusting the tales for a young audience. But the Victorians weren’t the first to amend the stories... even the most-recognised fairytale-tellers of all, the Grimm Brothers, come in for a bad reputation in Maitland’s eyes. They may have been the pair who went around the peasants to gather up the spoken stories to publish for the first time in 1812, but they were also the pair who repeatedly reworked those same stories in every new edition of their book, until the stories bore little relation to the originals.

Framed as a monthly pilgrimage to 12 of Britain’s most important and contributory forests, in painstaking detail and beautiful language Maitland relays the origins of that woodland, the people who lived in or nearby it, the stories derived from it whether old or new (for instance, Raoul Moat’s hideout in Epping Forest in 2010 doesn’t pass unnoticed), and the present condition and use of the land.

Each chapter is supplemented with a fairytale of Maitland’s own, which are sinister reworkings of original stories. There’s surely no one more suited to this task than Maitland, a magical realist writer who knows these stories inside out. And considering that, as she explains, these are stories that have been rewritten innumerable times over the centuries, it seems only fitting that she is the one to rewrite them for a 21st Century reader. But be warned, Maitland’s reader is an adult (as was the original intention): hers are not fairytales for children.
Posted by Jane at Saturday, January 26, 2013