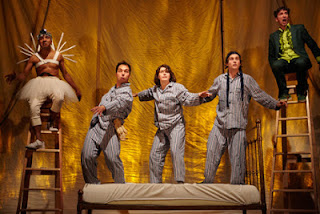 Over the years, I’ve read the book of JM Barrie’s Peter Pan and seen several adaptations of it – including the hanky-wringing Finding Neverland film from 2004, and the National Theatre in London’s production in 2002 (which concluded with an astonishing zip-wire across the entire auditorium).

But all of those pale into insignificance when compared to the Bristol Old Vic’s Peter Pan – which is the theatre’s big Christmas show that runs until January 19, 2013. This is a show that right from the off had my friend and I (both 30-something) in raptures of delight – because upon opening the programme we squeaked: “Stickers!” And it only got better from there. 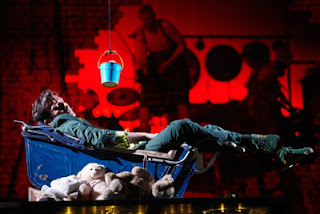 P – is for Peter Pan, obviously. And in this production the boy who never grew up is played by Tristan Sturrock, who is easily my favourite contemporary actor, and who has made a name for himself by starring in BOV’s biggest shows recently (Far Away, Treasure Island, Coram Boy, Mayday Mayday etc). As Peter, Tristan surpasses himself – ricocheting around the stage, dancing from suspended ropes, and inviting the audience into his web of perpetual youth.

E – is for everyone else in the cast. There’s no weak link in the chain and it’s hard to pull out a few. But obviously Madeline Worrall (as matronly Wendy) deserves a bow for being on stage in almost every scene, for holding the cast together and for keeping Peter in check at all times. Madeline’s singing is also phenomenal. Also, Tinkerbell's accent is top notch.

T – is for The Set. Overseen by Michael Vale, the scenery is a feat of creativity and ingenuity. And while the imagination of water is borrowed from Swallows & Amazons, this is a nice continuity between the shows. The sets from the Darlings’ bedroom to the Lost Boys’ lair are all ingenuously created… sometimes before our eyes. Look out for the skip.

E – is for Emily May Smith (who plays several characters). She’s a relative newcomer having only graduated from BOV Theatre School this summer, but she is becoming a regular on the main stage after recent turns in Wild Oats and Does My Society Look Big InThis? And rightly so: Emily is full of character, charming and a delight to watch. I hope we see more of her in the years to come.

R – is for Ropes. The stage is filled with hanging ropes at all times – from zip wires, to pulleys to things I don’t know the name of, the acrobatics of the cast look so entertaining that I was desperate to have a go myself. 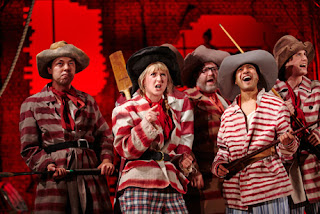 P – is for pirates, because what would a big BOV show be without them? After Swallows & Amazons, Treasure Island and now Peter Pan, we have come to expect and respect the pirates on the main stage. In particular, another BOV regular Stuart Mcloughlin (Swallows & Amazons, The Six Wives of Henry VIII etc) is phenomenal as Captain Hook. Banish all thoughts of cuddly Robin Williams as the one-handed pirate leader, Stuart has clawed his way into the history books with his Scottish, kilt-wearing, guitar-playing villain. Perfect.

N – is for Nanna the dog, portrayed here by Howard Coggins – yet another BOV faithful (Swallows & Amazons, Treasure Island, The Six Wives of Henry VIII etc). My only complaint is that Nanna is on stage for too short a time – but when she is, Howards’ canine character is a show-stopping delight. From the costume to the doggy mannerisms, Nanna is a true treat.

In short – Peter Pan was so good that I’m going to go and see it again. Whatever you do, please do not miss it.

Click here for moreinformation and to book your tickets. 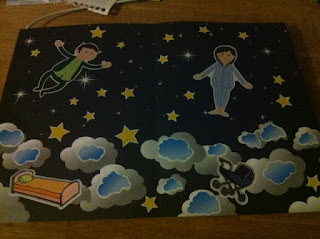