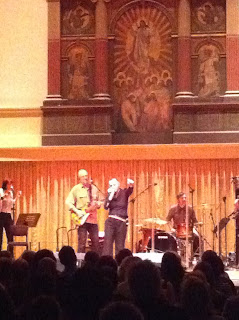 How many acts have you seen who receive a standing ovation just for walking on stage? The love for Sinead O’Connor at St Seorge’s was so strong that she was given standing ovations after pretty much every song, and in any rare quiet moments someone in the audience could usually be heard to shout: “We love you, Sinead”. All of this adulation is met with what seems like genuine bewilderment that so many people care… and that they care so strongly.
Despite what you’ve heard in the press about Sinead being a fragile character who flits from failed marriages to doomed relationships like there’s no tomorrow, she presents in Bristol as a strong woman who knows her own mind. Albeit one who is tired of endless failed affairs.
Tiny in stature and dressed all in black with her trademark shaved head, Sinead packs a colossal punch with a voice that encompasses every range from quiet whisper to mighty roar without breaking stride. With an eight-piece backing band, there are nine people on the St George’s stage, which is excessive and, at times, the music drowned out Sinead’s wonderful voice – which seems like the result of bad production: something Sinead seemed aware of, too, by her gestures of stage for the levels to be altered. There was simply too much backing music, which was often distorted and added little to Sinead’s singing.
This was perfectly emphasised by her first a capella song, Stretched On Your Grave: a note perfect rendition that proved Sinead really doesn’t need a whopping great backing band to support her.
Sinead’s voice is legendary, and it’s hard to believe that both she and it are 45… and that it’s been 23 years since Nothing Compares 2 U hit the top of the charts in 1989. Needless to say, her version of the Prince-penned classic still carries enough weight to both send shivers down my spine, and make the hairs on the back of my neck stand up. The atmosphere in the room at this point was electric –there was absolute stillness among the sold-out crowd, who were motionless and fixed in their determination to absorb every millisecond of Sinead performing her best-loved song.
But there was love for every song she sang. Whether it was a well-known former single such as Three Babies or The Emperor’s New Clothes, or tracks from her current album How About I Be Me? (And You Be You?). These were hardcore fans in the room, so the tracks may have been new, but Queen of Denmark, I Had A Baby and Old Lady were met by the audience as if they were also 23-year-old favourites.
Please visit St George’s website here for more information about further upcoming gigs at this extraordinary and treasured Bristol venue. Sinead's official website is here.
Posted by Jane at Tuesday, March 13, 2012