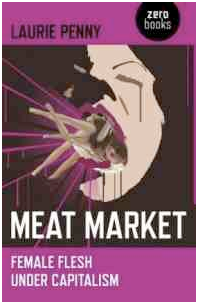 A few weeks ago, I bought Laurie Penny’s short book Meat Market. I’d planned to blog a review of it but, after reading, was left feeling so “meh” about the book that I never did.

At £9.99 (less via Amazon) for 68 pages, Meat Market patently isn’t good value. But I knew this before I paid. However, after reading it I wondered how the publishers (Zero Books) were justifying £9.99 for what constitutes little more than a badly-edited pamphlet.

This aside, the content of Meat Market left me underwhelmed. Not so much in the message Laurie was imparting (ie, that women are items to be consumed), but more because I didn’t feel I was reading anything new in her book, or that I had learnt anything from it. I wondered what the point of Meat Market was.

Meat Market constitutes four brief chapters, which loosely inform each other, but none of them feels like new writing from Laurie. And here comes the big problem. Some quotes within this book appear to NOT be new. (If I'm wrong, then please forgive me writing this humble blog post.)

ONE: On page 18, Laurie quotes Finn Mackay (who Laurie calls ‘MacKay’, and the proof readers never corrected). No source is given in the footnotes, leading me to assume this is an interview Finn gave to Laurie for Meat Market. But when I contacted Finn yesterday to ask if she had been interviewed by Laurie for the book, Finn not only had no knowledge that she was even mentioned in the book, but said: “She never interviewed me or told me she was using quotes in her book. It must be from conversations years ago. I don’t think I’ve even spoken to her [Laurie] for about two years.” In fact, the quote Laurie uses by Finn was originally printed here.

TWO: Laurie attempts to pick apart some views made by Julie Bindel. While on page 38 Laurie states that she is quoting Julie from a 2009 article, on page 42 Laurie makes the claim that she interviewed Julie specifically for Meat Market for the subsequent quote (“… Bindel, when I spoke to her in the process of writing this book, emphasised …”) . A fact Julie refuted yesterday in a Tweet to me: “She [Laurie] said she interviewed me for her crap book. All lies. She never did.” A lengthy Twitter discussion broke out between Julie and Laurie, and Laurie confirms that the quotes she attributes to Julie as new and for the book were in fact based on a 2009 phone call. Laurie said: “I interviewed you in the autumn of 2009, on the telephone. It lasted about an hour! I can dig out the transcripts if you like…” But it’s the same quote attributed to Julie as being gathered in the preparation for Meat Market that Laurie uses here. Laurie later Tweeted to clarify: “that article was extended into c3 of my book. Just because you [Julie] don't like what you said doesn't make me a liar for writing it down”. (NB: I’m not calling Laurie a liar about anything, but I do wish it had been made clear to readers that some of the book had been available in other formats prior to publication.)

So, while I originally was left feeling cheated by Laurie’s book because of how unsubstantial and dated much of the content felt to me, there are now at least two instances of people quoted not even knowing they were going to appear in this book.

This made me wonder about the book in general, so I went on Google and put in “Laurie Penny” alongside the names of a few random others quoted in Meat Market. And this is what I found:

And, I was very surprised to see that quotes on page 62 from Judith Ramirez are identical to those printed in a March 1988 New Internationalist article by Jane Story.

- Is Laurie re-using quotes? If so, I wonder what people think about this?

- If this is true, I wonder why it was not made clear that parts of Meat Market have been previously published – as is usual when this is the case?

- I also wonder why the Judith Ramirez quotes (from 1988, and for your reference Laurie was born in 1986) are presented as if Judith spoke to Laurie, rather than being credited to where they appear to have come from. (Perhaps I'm wrong about this, and Judith did repeat herself verbatim to Laurie during her research for this book.)
Posted by Jane at Sunday, July 17, 2011