'Bridesmaids' and the feminist argument 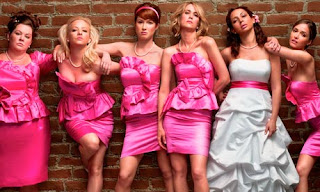 I’m trying to work out whether or not Bridesmaids (2011, Paul Feig) is a feminist film. Maybe I’m only wondering this because of the unusual dominance of women in the line-up, but having a mostly-female cast certainly doesn’t make a film feminist – in just the same way that having a 100% female membership does not in any way make the WI feminist.

There’s been a lot of debate in recent days about this, not least from Zoe Williams, and I was inordinately excited about watching the film and making up my own mind. Bridesmaids was brilliant, hilarious, tear jerking and wonderful. Written by women, performed mostly by women, it is weirdly directed by a man… but you can’t have emancipation in one go, I suppose.

In a post Sex and the City pop culture world, Bridesmaids allows its protagonist Annie (Kristin Wiig) to be woefully aware of her societal failings as a single, unemployed, 30-something woman who has moved back in with her mother, while her best friend is preparing for marriage. Annie’s fuck buddy is Don Draper (aka Jon Hamm) – who treats her with the kind of disregard and casual indifference that surely strikes a chord with everyone who has ever experienced unrequited love for a cruel partner.

The poster and advertising for Bridesmaids (above) is very misleading about the film. It features the maids in cheap-looking dresses, leaning against a brick wall, looking borderline aggressive. The poster makes the film look like Shameless meets Alan Warner’s The Sopranos for a night of excessive drinking and shagging in the toilets. So much so that an hour into watching Bridesmaids, I found myself impatiently wondering when they were going to start throwing up in a gutter. Thankfully, it was round about this point that the street diarrhea scene kicked in. This was underscored by a perfect one-liner from Annie to the mortified street shitter: “Don’t worry, we’ve all done it.”

What Bridesmaids proves is that women can be funny, and by their own doing. While this shouldn’t need saying, it clearly does, as there are pitifully few contemporary films when women get to carry the gags and deliver the punchlines. Alongside Tine Fey, Kristin Wiig is making a valid point about women in the media. Much as I love Jennifer Aniston for enduring relentless public humiliation at the hands of a string of Hollywood bachelors, her films are appalling reinforcements of the idea that women are only and always victims of a male-dominated scenario. Which is unbelievably boring.

Which makes one of the major flaws of Bridesmaids the fact that what ultimately rescues Annie from her downfall is a charming Irish policeman (The IT Crowd’s Chris O’Dowd), who inspires her to salvage her life through the medium of baking cakes. For fuck’s sake!

But is this a feminist film? Running it through the Bechdel test, the answer is ‘yes’. There are more than two women in it; they all talk to each other; and about things besides men… sort of. So I’ll say ‘yes’, for the purposes of ease (although some on the website disagree). And Julie Bindel has Tweeted me to say it is “definitely not” a feminist film, which may be the authoritative answer!

Regardless, Bridesmaids was hilarious, true and honest. I loved it, I laughed almost continually throughout, and even had to hold back a tear at one point – not because the film was sentimental, but because the relationship between the two women genuinely struck a chord. Such fun.

PS - Conversely, I also watched Bride Wars, which was on TV last night, and could unwillingly argue that it too passed the Bechdel Test, despite being a typical, romcom in which the two, named female leads discuss topics other than men – but only by definition, as their whole existence is centered around their urgency to marry in a repulsively extravagant manner, and to express their spite and bitterness for each other in a variety of grotesque fights that merely proves women are as hideous to each other as patriarchy likes to claim.
Posted by Jane at Monday, June 27, 2011