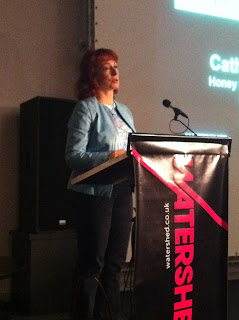 Catherine Hakim has enjoyed a lot of column inches lately, not to mention TV coverage, thanks to her book Honey Money, which claims attractive people earn 20% more than their scruffy colleagues. Hakim’s book is divided into six categories: beauty, sexual attractiveness, social skills, liveliness, social presentation, and sexuality itself.

Celia Walden at The Daily Telegraph was in on this last April when Hakim’s original report was published in an academic journal, which makes me wonder why it’s taken the rest of the world so long to catch up, but anyway. Walden seems quite enamored with the concept, enthusing: “The best news? If you’re not born with it, you can learn to have the EC factor.” (Hakim cites Coleen Rooney as an example.) “We have this idea that you can’t be beautiful and clever. But what’s superficial about beauty?” Hakim asks Walden, adding, as if to prove her point: “Cleopatra exploited her erotic capital and nobody thought the worse of her for it.” Case closed.

In The Guardian, Zoe Williams recently interviewed “social scientist” Hakim, but arrived and left unimpressed. The result, by the way, is well worth reading as an exercise in how to interview someone you really don’t like. In trying to get Hakim to explain her six categories of erotic capital (listed above), Williams elicits this: “I'm saying that there are six elements of which only one is purely sexual, and the second one, sex appeal, is only partly to do with sex. Four of them have nothing to do with sexual attraction.” Towards the end of the interview, Williams writes: “[Hakim] disowns her views then restates them with abandon. She gets incredibly cross. I am slightly too old to capitulate just because someone is unpleasant to me. This you might call my unerotic capital.”

Over at Stylist, the question of the week was: “Should your looks dictate your pay packet?”. Hakim wrote: “Women should stop worrying that it is frivolous vanity to spend time on make-up, nice hair and nails, or good clothes that help you stand out from the crowd. The investment yields benefits. Smile at the world and the world smiles back.” Julie Bindel countered: “I believe we should be judged for our abilities not our dress sense.” She added: “This obsession with remodeling our bodies, face and hair, in order to look acceptable for men, further perpetuates the gap in power between the sexes.”

At Time, the question was rephrased as: “What's wrong with emphasising inner beauty and qualities like kindness, altruism and courage instead?” And the New York Times felt that uglier people should be protected by the same legislation that protects already recognised minority groups. 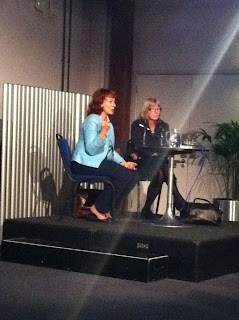 So, having racked up mileage on both sides of the pond, let’s head over to Bristol’s Watershed where, this evening, Catherine Hakim took to the microphone as part of Bristol Festival of Ideas to tell us where we’ve been going wrong. I had the dubious pleasure of being in the audience…

Poor old Catherine Hakim. That's what I say. The woman seems genuinely baffled by the hostility she received from the audience this evening (the splattering of empty seats around the room revealing this was certainly not a sold-out affair), and seems genuinely convinced that she is right and if only us ignorant, ugly folk would see this, the world would be a much more attractive place for her and her equally superior chums.

Here are some of the best pearls of 'wisdom' uttered by Hakim this evening:

HAKIM TRIES TO EXPLAIN HER OWN THEORY:

HAKIM COMPLAINS SHE HAS BEEN MISUNDERSTOOD:

So, there's a lot to digest there. Or is there? It seems to me that Hakim has one rather weak and tired idea (which is by no means original), which is that people who are more attractive do better than those who are less attractive. That's it. Except she seems to have stretched it out into a very weak-sounding book (I haven't read it - not for £20!) based on a set of nameless studies (or at least unnamed in her talk, although I am very interested to know their academic worth) over the past 10-15 years.

Hakim's arguments against feminists are extraordinary. I would love to know why she hates feminists so much, and keeps referring to them as an 'other' type? What have feminists ever done to her? Other than ensure she has the right to vote, that she is able to have had her university education, that she is able to work in a senior role and earn her own income? I have no idea if she is married or a mother (frankly, I doubt it), but if she is, then feminists have ensured she has plentiful rights there that she would otherwise not have enjoyed. And whether or not feminists achieved this on days when they wore lipstick, Hakim would be advised to realise quite how much of her freedom is down to feminists. She'd also be advised to realise that while Sheila Jeffries is indeed a feminist writer, she is far from the only feminist writer in the world, and there are many a lot closer to home than Australia, where Jeffries is based.

There's a well worn saying that people in glass houses should not throw stones, and the uncharismatic presentation (both verbally and physically) by Hakim this evening brings this phrase to the front of my mind. I would not normally comment on someone's appearance in this way, however in this context it seems wholly relevant. Her extreme defensiveness to criticism, and her persistent reluctance to engage in discussion positing an alternative perspective is staggering, as is her willingness to blame others for misinterpreting her writing — perhaps she should have written more clearly in the first place, since so many people have apparently misunderstood her.

Hakim presents as a woman who doesn't seem to like women much, and who holds them in extremely low regard. I'm always curious about these women-who-hate-women, and in my idle moments (not many) I plot conducting my own cod-sociological study into them. Sadly, I doubt Hakim will participate — as the session concluded, the chairwoman asked Hakim if she had an email address where people could ask her more questions on her theories. Hakim looked horrified and said sniffily, as if this was something far beneath her: "I don't have any kind of online forum."

(By the way, Honey Money is currently floundering with only 2.5 stars from 15 reader reviewers over on Amazon, showing that the proof really is in the pudding. The reviews are headed with titles such as: “Cosmo article with footnotes”, “Theoretically weak scholarship” and “Nothing we don’t already know”.)

8/9/11 — Postscript: I have asked the publishers of Honey Money, Allen Lane, if they'd be able to send me a review copy, so that I can read it and see if Hakim explains herself better in written word than spoken. As yet, they have not got back to me.
Posted by Jane at Wednesday, September 07, 2011